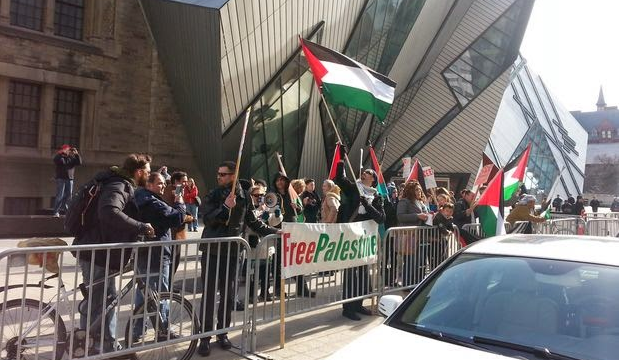 About a dozen slimy fanatics gathered across the street from Toronto's Israeli consulate last week to shout about how Israelis are Nazis. I've seen these creeps up close and personal, which is a lot closer than anyone wants to be to them.

Jonathan Halevi notes the number of organizations "endorsing" the types of demonstrations he describes. But he didn't mention that the standard, transparent trick these activists use is to form numerous organizations, all with essentially the same membership, to make it appear they have far more support than they could ever actually muster.


Coalition of Canadian pro Palestinian organizations sided with Palestinian “political prisoners,” most of them are convicted terrorists, including suicide bombers captured alive and mass murderers. Demonstrators called Israelis “Nazis” and warned that “Zionists are taking over the Canadian government.” The Palestine House marked the “Palestinian Political Prisoners' Day” in series of events, including a demonstration in front of the Israeli consulate in Toronto (April 17, 2014), vigil dedicated to Palestinian political prisoners in front of the Israeli consulate (April 18), panel discussion and a movie screening at United Steelworkers Hall (April 19) and letter writing night at Beit Zatoun (April 20). The demonstration was organized with coordination with the following organizations Beit Zatoun (a cultural and activism centre in Toronto purporting “to explore issues of social justice and human rights, both locally and internationally”), Coalition Against Israeli Apartheid (CAIA), Canada Palestine Association (CPA), International Jewish Anti-Zionist Network (IJAN), Independent Jewish Voices (IJV), Not In Our Name (NION), Queers Against Israeli Apartheid (QUAIA), Stop the War Coalition (STWC), United Network for Justice and Peace in Palestine/Israel (UNJPPI), Women in Solidarity with Palestine (WSP).