Everything you're about to read in this post needs to be qualified by the fact that my day yesterday started by pounding back more liquor than I could keep track of with Postcards of the Hanging blogger Skippy Stalin.

We get into some public arguments, but in real life Skippy is a hilarious writer, a great guy, and one of the most astute political observers around. But don't tell him I said that, or it'll go to his head and encourage him to pick more fights with me.

We boozed away for about four solid hours beginning in the early afternoon at an Irish pub in the Annex neighborhood. Never having been to Ireland, I can't say this for certain, but I strongly suspect that their pubs, unlike every Irish pub I've ever been inside in Toronto, are not staffed exclusively by women wearing tartan miniskirts and knee socks. It's not that I mind that, but it has a slightly pervy connotation to it, and the weird sense that you're being served alcohol by a teenage Catholic school girl.

It didn't help that our waitress was extremely pretty and had that beautiful combination of raven hair and alabaster skin tone, enhanced by the additional striking contrast of perfectly applied bright red lipstick.

After all the laughs, liquor and loquaciousness at the pub, I had to abandon Skippy to dash home in order to shower and put on a suit to attend the Israeli consulate's annual Independence Day party.

This is the third year I've been invited to these things, I assume because of some clerical error, and am always happy to go because there tend to be interesting people, attractive women and free food and wine. Or maybe it's the free wine that makes the people seem interesting and the women attractive, but whatever the reason, I seem to enjoy myself at these things.

As it was last year, yesterday's celebration was held in the majestic gallery of the Royal Ontario Museum. My date for the party was my exotic babe friend Anisa, and after three years of attending, a lot of the faces have become familiar, such as Vardit Feldman, a stalwart activist within Toronto's Jewish community, blogger Laura Rosen Cohen and her husband, and of course, the ubiquitous Bernie Farber among others. There were also some friends, like University of Toronto professor Aurel Braun and Joanne Hill, the Jewish Tribune's crack reporter, who was there to cover the event.

But friend or not, again, like last year, Joanne refused to take a picture of me with Ontario Premier Kathleen Wynne who was there to party a bit and deliver a speech. So as my date was off in pursuit of hors d'oeuvres, I had to take a 'selfie' with Ms Wynne. My strong criticism of the Premier remains intact and I still think the previous Liberal government and hers have driven Ontario to the edge of bankruptcy. But on a personal level, I have to say Kathleen Wynne is a good sport, a nice person and a generally good egg. She patiently cuddled up to me while I screwed up at least two of the shots before I finally managed to get one (see earlier about drinking all afternoon). 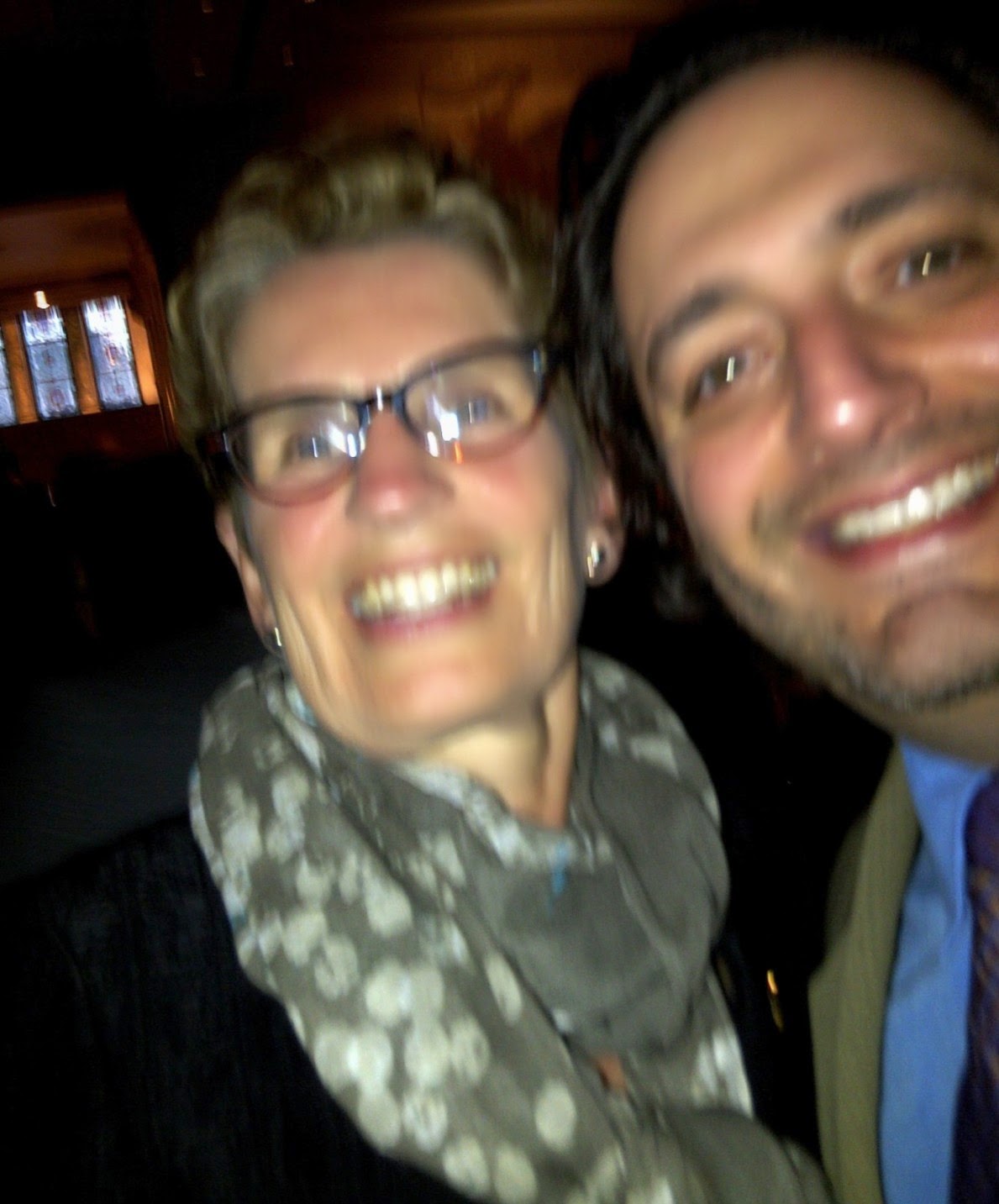 And since I've been asked this already, I'll let you know that no, the reason that the Premier looks happier in the photo with me than you've ever seen her in a picture before is not because I'm grabbing her ass.

Kathleen Wynne gave a passionately pro-Israel speech to the hundreds of soiree attendees and boasted about the expanded economic ties between Ontario and Israel under her leadership.

As I noted last year, that will come as a bitter pill to many of her fellow alumni at the wretched Ontario Institute for Studies in Education, located only a block away from where she stood. It's comforting to see that not all of that school's graduates are permanently poisoned by the vicious, anti-Semitic activism that is practically a religious doctrine within some of its programs.

An odd facet of the Premier's speech, which I gather is something she does regularly, was to acknowledge the Native tribe that had, some centuries ago, controlled the territory where she spoke. In this case it was the Mississauga tribe. However that is a rather odd practice and in cases such as this, has a fractured historical lineage. The Mississauga were the last Native group to control the area around Toronto, but that was because they came to occupy it after is was temporarily abandoned by the Seneca and the area changed hands because of warfare and disease and migration among the Huron, Seneca and Mississauga as well as other tribes. So really they should all get a mention, shouldn't they? And what about the wildlife like the deer that were displaced by people? Shouldn't they get a shout out too? Or maybe rather than trying to create the ridiculous impression of being progressive and sensitive with these meaningless acknowledgements, it would be better if people just didn't attempt them.

Speaking of deer and asses, I was bitten on the ass by a deer once. Really, I'm serious. I was at Marine Land and Game Farm about a decade ago with my son and a friend and I had brought a bag of seedless grapes to feed some of the deer and other animals. It was a hot summer's day and while I knew that grapes are popular with deer (and llamas like them too!), I had no idea how much so. As soon as they caught wind of me giving grapes to one of them, I was instantaneously swarmed by more than a dozen of these big critters. They were being very aggressive and I had to hold the bag of grapes high up while they were trying to get at it all at once. Then I suddenly felt a very hard, strong chomp on one of my butt cheeks. One of the deer had bitten me on the ass, and while I turned to see what had happened, another deer managed to grab the bag of grapes and rip it open, so that most fell to the ground and the deer started feasting on them. They had been working together to create a distraction, the clever mammals. But I digress...

Anyway, back at the Israeli Independence gig yesterday, following Kathleen Wynne, the Consul General, DJ Schneeweiss delivered the second and final of the evening's speeches. It was a strong exultation and defense of the Jewish state and its vibrant democracy. The defense may have been more than needed since among sane, rational people, Israel widely is seen as a pillar of western values in a region filled with reprobates and a bulwark against the hostile forces of Islamic extremism.

But it's easy to understand how one might feel a bit over-defensive when one is continually assaulted by protests from local Islamist maniacs, psychotic leftist professional protesters and the creepy, pathologically stupid Munchausen Jews of a depraved anti-Israel group calling itself "Independent Jewish Voices."

While on the whole a rousing, well-executed speech, it ended on a slightly awkward note when Mr. Schneeweiss referred to Israel as a "triumph of will." While I agree with the sentiment, I thought I should let him know after the speech that he might want to avoid that expression when describing the Jewish State, as it is almost identical to the title of the most infamous and adroit of the Nazi propaganda films, "Triumph of the Will."

Mr. Scheeweiss did seem a bit shocked by that when I mentioned it and said he'd certainly avoid that phrase in similar circumstances in the future.

After the Israeli Independence Day party, I felt like I needed a bit of a walk, and so headed along Bloor Street, where I spotted something that I thought exceptionally odd.

I love poutine as much as the next guy, but the combination of french fries, cheese and gravy are plenty filling and starchy enough for most. I don't know whose idea it was that people would want to eat that wrapped in tortilla bread, but apparently, New York Fries thinks someone might want just that for breakfast.

And speaking of wraps, after taking a picture of the poutine wrap sign, that pretty much wrapped up my night yesterday and I was off home to get some much needed sleep before this morning's hangover. 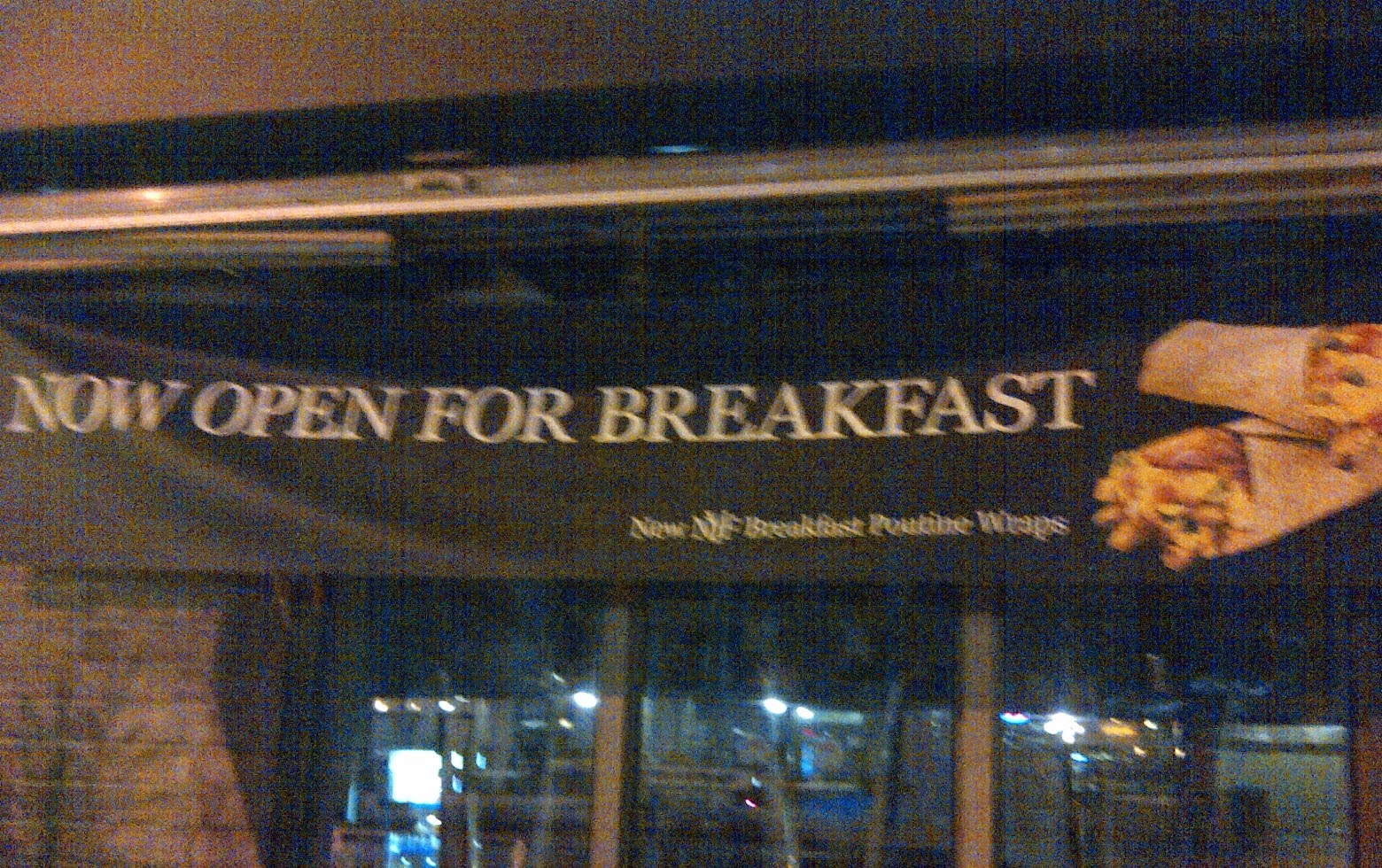 LOL, I have a very good friend that is a hardcore lefty. Even knows some of those professional protesters that Genuinewitty covers. Used to run with them and hates them lol.

Every time we get together it always involves drinking and lots of political discussion/arguments. And some of my libertarianism is rubbing off on my friend. He is even a fan of Rob Ford now.

"Recognising the Traditional Owners" is an Aussie thing:
http://www.dpc.vic.gov.au/index.php/aboriginal-affairs/protocols-for-recognising-traditional-owners

What a funny, witty, smart and entertaining post. Kudos, man. That was so well written. Wynne and you in selfie. Classic. Keep up the great writing.

My only criticism is that there should have been more about how awesome I am. More people need to know that. Especially that waitress.