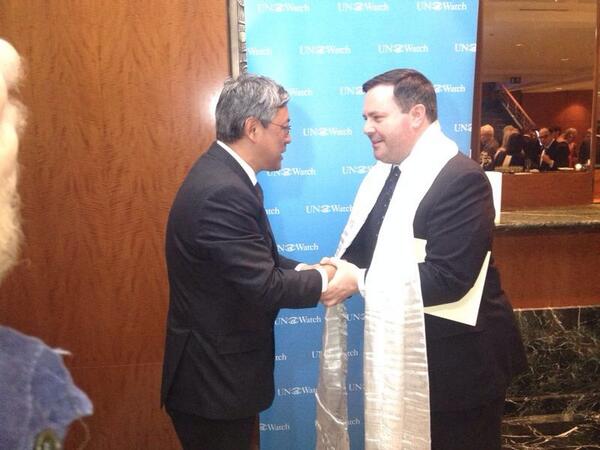 Geneva-based human rights group UN Watch presented its annual Moral Courage Award to Canadian cabinet minister Jason Kenney, one of the country’s most influential national figures, a decision that drew strong praise from the Dalai Lama, the Nobel Peace Prize Laureate and Tibetan spiritual leader who sent a special envoy to the Geneva ceremony attended by UN officials, ambassadors, and community leaders.
“UN Watch honors Minister Kenney for demonstrating the courage to lead in upholding the founding principles of the United Nations, and defending the true principles of human rights,” said UN Watch executive director Hillel Neuer.
“When others have been silent while serial perpetrators of human rights abuses like Iran and Syria seek to hijack the UN’s human rights and anti-racism causes, Minister Kenney has been a clear and consistent voice for their millions of victims, opposing tyranny, hypocrisy and injustice.”
In an emotional moment, the Dalai Lama’s envoy placed a traditional Tibetan scarf upon Kenney to recognize his outspoken defense of oppressed Tibetans.

Adopting the Liberal trick of huckstering the ethnic vote and using foreign persecution of Christians to pander to your party's evangelical base are examples of moral courage?

My, how times have changed. It used to be that moral courage required taking positions that could cost you something. Apparently not anymore.

"Standing up to Russia," to the extent that Canada has actually done so (we're not actually willing to commit money or forces to Ukraine) is fairly easy in country with a significant Ukrainian population and an election coming up. In real terms, what have we done to China in regards to Tibet? The last I checked, the Harper government did a 180 on China relations from when his government first took office.

So, what has Kenney actually risked ?

Oh, they've been speaking out on things from Uganda, the middle east, all over.

And I'm pretty sure UN Watch wasn't bothering to take Canadian domestic policies into account and why should they? Are you saying there's another major political party in this country that doesn't do the ethnic pandering thing as much as the Conservatives? That business is the Liberals' stock-and-trade.