Jon Allen was one of the main organizers of a clownish rally demanding new elections and a Parliamentary inquiry on the basis of robocalls made during Canada's 2011 election campaign, which evidently did not prevent a single person from casting a vote. The allegations of callers misrepresenting themselves as Elections Canada officials suggests a crime which merits police investigation. But the ridiculous hysteria of people like Allan, while professing devotion to "democracy," is clearly motivated by nothing other than an intense hatred of the Conservative government and conservatives in general.

And how do we know that? Because they tell us so.

Sun TV host Michael Coren and Allan have become embroiled in a war of words in the last couple of days, in which Coren mocked Allan for his histrionic idiocy of suggesting the robocalls were the beginnings of a fascist Canada.

Allan responded with a facebook posting that while meant to refute Coren, actually helps reinforce the conservative pundit's case. Aside from a dispute over the numbers where Allan inflates the attendance of his gathering by a factor of about 3 times the actual amount, the real meat of the dispute comes from the perceived value of rally co-organizer Zafar Bangash. While accusing Coren of "mental disabilities" Allan praises Bangash, a fierce advocate of the Holocaust-denying Iranian regime of Mahmoud Ahmadinejad, as "an exemplary citizen." Some of Bangash's exemplary citizenship includes implicitly threatening the lives of Jews in Iran, his racist reference to American President Barack Obama as "this black man in the White House," his call for war and the imposition of Islamic law in Israel, and his support for terrorist groups like Hezbollah.

While he might be able to credibly profess ignorance about Bangash, since ignorance is obviously an area in which Mr. Allan excels, his claim that his wishes are for "democratic accountability, regardless of the party in power" are undermined by his inability to keep himself from making statements revealing his partisan biases.

In response to one of his online cheerleaders in his posting's comments, Allan replied, "I hate Sun media, and I hate that they;re (sic) buying up all the small town newspapers in Canada because now they are propagating this filth to the small towners... no wonder the Conservatives are gaining support."

Aside from betraying an astonishing contempt for the intelligence of small town Canadians by assuming their political leanings could be so easily affected, Allan conveniently lets anyone interested know that his real motivation is hatred of the Conservative party. 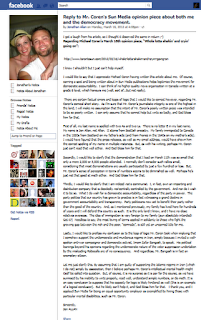 Mr. Allan is not unique in his dissembling. This profession of concern for democracy, which he paradoxically wants manifested in the form of the rejection of a valid election because of the objections of a few radical activists, is a position shared by the partisan LeadNow organization. The difference between Allan and LeadNow's intelligent Executive Director Jamie Biggar is that the latter is smart enough not to publicly boast about his more obvious motives.