Self-hating Jew is a term that gets bandied about too easily and usually incorrectly. There are some in the pro-Israel community who apply the term as a blanket to any anti-Israel Jew. That's clearly not the case for many. In the case of a number of radical anti-Israel Jews, they are not the least bit self-hating (although if they had more self-insight, they probably should be), they are self-promoting narcissists who hate other Jews.


The stupidity of what Weiss wrote is obvious. American Christians and Jews are not subject to forced, arranged marriages common in Islamic states. They marry because they fall in love with someone, not to grasp at Jewish power and wealth. Jews are one of the most integrated, assimilated  ethnic groups, so it's no wonder there is a great deal of intermarriage.

It`s not news when a Protestant marries a Catholic of a Buddhist, but in Wesis' bigoted mind, when a member of a prominent family marries a Jew and it doesn`t make the front pages, it is part of some conspiracy or as he puts it, `one of the great bans on reporting, alas because of Jewish insecurity...But there's a lot of denial of this, because of the fear that pointing out the obvious about our social position would bring about pogroms` 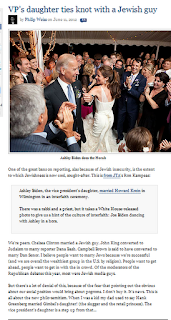 The insecurity, fear and cowardice is on the part of Weiss, which might well account for why he is so desperate to endear himself to the enemies of Jews and the Jewish state.

Phil often spins stories like this to fit his narrative (that intermarriage will eliminate ethnic tensions) so that he can cast the illusion that he is more knowledgeable about a given situation. Hence, his frequent essays on "jewish privilege" as a shared experience because it is the only way to connect him to a situation.

The idea that the Vice President's daughter needed to marry up is so absurd, I thought Phil would be able to know better. A lot of his commenters are angery.