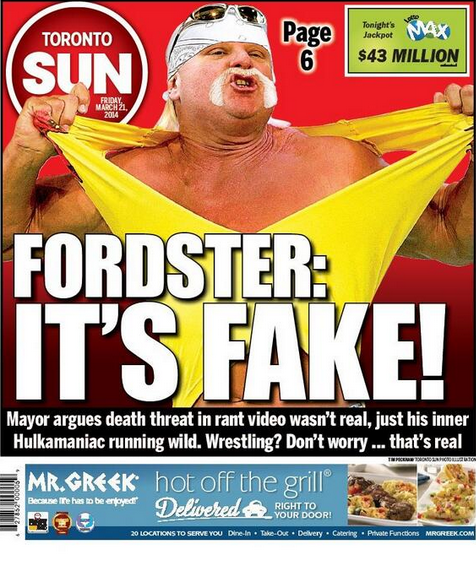 TORONTO - When I broke the story of the existence of a Mayor Rob Ford ranting video in which he says “I need f---ing 10 minutes to make sure he’s dead” on Nov. 7, within minutes people close to him said he was doing a parody of wrestling legend Hulk Hogan, whom he was soon to arm wrestle.

“I’m going to kill that f---ing guy. I’m telling you it’s first-degree murder,” the mayor could be heard saying in the surreptitiously shot video that was shopped around to media outlets and eventually bought for $5,000 by the Toronto Star.


Yup, I was one of those people and when you consider what was said in the video, it was actually pretty obvious.
Posted by Richard K at 10:02 AM

In a word, horseshit.

Ford could have offered that explanation up months before the lawsuit was filed, but didn't. That nice boy, Jimmy Kimmell, asked His Worship who he was talking about just three weeks ago and was told that he didn't know. Who would lie to Jimmy?

Oh, and as I remember the video (and I haven't seen it in several months,) I remember the predicate for the rage being someone "calling my brother and me liars and thieves," or words to that effect, which I'm pretty sure Hulk Hogan never did.

Luckily, a statement of defense isn't, as far as I know, subject to perjury laws.

And yet there still is no alternate explanation for the stuff Ford was saying about "donating" what he wins from the fight and being "in my underwear."

As eccentric as anyone says he may be, I don't think he's been known to threaten to strip down to his tighty whiteys as a prelude to pummeling anyone under circumstances other than a charity wrestling match. I can't quite calculate how that would enhance the beating otherwise.

I don't know what your experience is, Richard, but mine is that crackheads are pretty eccentric. And, at this point, it's not a question of how "eccentric as anyone says he may be," I think that's an established fact. I'm not sure how even you deny that, now, given the available evidence.

Also, the arm-wrestling match was on TV, and there was no underwear shown.

If this case goes to court, which I doubt it will, the tape turns out to be a wash, which just leads to more questions.