Toronto's notorious "Islamophobia" case turns out to be something else entirely

It's not Islamophobia when two hijab-wearing women get called terrorists after they call a couple of black kids "monkeys." But Toronto is a city filled with people anxious to signal how "progressive" and virtuous they are, as long as it doesn't involve thinking, or any more real work than posting on social media. So it's little wonder that they lapped up an opportunity to be manipulated.

Insulting Muslims for who they are is vile. But there are some activists within the Islamic community who want the religion of Jihad to be perceived as a perpetual victim, even when it initiates violence and oppression. So little PR stunts like the one we saw in Toronto are not totally uncommon.

Despite all we hear about the dire state of Islamophobia, it is a vastly exaggerated phenomenon in Canada. Statistics Canada indicates that blacks are more than five times as likely to be the victims of hate crimes than Arabs, and that hate crimes against Jews are three times the number of hate crimes against Muslims. That statistic is all the more striking considering there are almost four times as many Muslims in Canada as there are Jews.  Odd how we never hear about these figures in the media.

Considering that Muslim-majority countries in the middle east are notoriously anti-Semitic and racist towards blacks, we may see these trends increase along with Canada's new cultural dynamic.

Funny how reality and the media narrative frequently don't line up, isn't it? 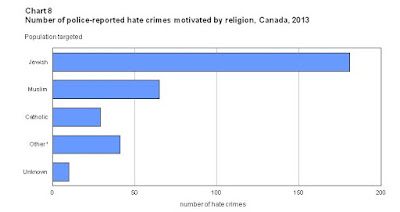 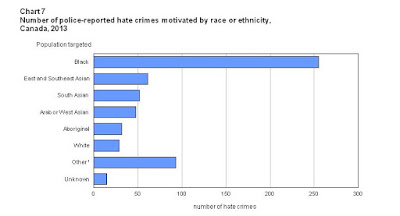