The pre-debate survey indicated the majority of the crowd agreed with Hitchens' opposition of the resolution. Given the ample ammunition to support his position, Blair was on the defensive for most of the night in front of a crowd in liberal downtown Toronto. In fact, Blair spent a lot of time reiterating that while religion is responsible for a great deal of the world's ills, it does not mean that all people of faith are bad, or that faith in of itself need be an evil.

Blair acknowledged that the scriptures themselves are a source of a great deal of the evil perpetrated in the name of religion. It is a source of concern to him and one that requires great introspection from organized religion. As an analogy for the closed-mindedness of some religious people, Blair relayed how a Labour party member came up to him after an election loss and said, "We've had four elections and the public has voted against us four times. What's wrong with them?"

Speaking of closed minded people that don't get it, the single disappointment of the night for me was the imperceptible presence of James Clark's deceptively-named, "Toronto Coalition to Stop the War" who failed to turn out in noticeable numbers at an outdoor protest.

Read the whole thing at The Propagandist

UPDATE: Here's me beside Hitchens 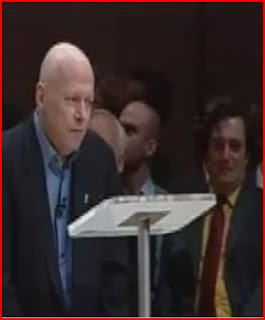 Link to debate videos here.
Posted by Richard K at 10:13 AM