Iranian President and Holocaust-denier Mahmood Ahmedinejad may be crazy, but a Wiki-leak cable shows that among the cadre of theocrats in the Iranian Mullah-ocracy, there is some evidence he may be a relative moderate compared to his fanatical colleagues. The same cable also gives further evidence that the Iranian president is a figurehead who is far from being the guy who calls the shots in Iran.

This report makes Ahmedinejad seem like the casino "owner" played by Kevin Pollack in Marty Scorsese's movie, who does what he's told and signs what he's told.

According to source, President Ahmedinejad surprised other SNSC members by taking a surprisingly liberal posture during a mid January post-Ashura meeting of the SNSC called to discuss next steps on dealing with opposition protests.

Source said that Ahmedinejad claimed that "people feel suffocated," and mused that to defuse the situation it may be necessary to allow more personal and social freedoms, including more freedom of the press.

According to source, Ahmedinejad's statements infuriated Revolutionary Guard Chief of Staff Mohammed Ali Jafari, who exclaimed "You are wrong! (In fact) it is YOU who created this mess! And now you say give more freedom to the press?!" Source said that Jafarli then slapped Ahmedinejad in the face, causing an uproar and an immediate call for a break in the meeting, which was never resumed. 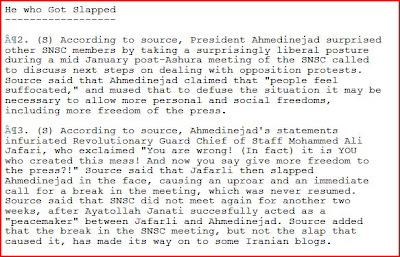