One of the more amusing revelations that the latest batch of wiki-leaks releases has provided is that the US State Department does television reviews of bad CBC dramatic programing (I'll include Little Mosque on the Prairie in the 'drama' category, since that show hasn't managed to evoke any more laughs than an ingrown toenail).

The US official who wrote the reports definitely has a future as a TV reviewer if he or she ever wants to get out of the dreary world of diplomacy.

The CBC show The Border comes under the heading of  "Canada's answer to 24 w/o that Sutherland guy" and the CBC miniseries H20 as "Give us your water, oh, what the heck, we'll take your country too."

Maybe the CBC should headhunt this person for a producer's job. Whoever it is obviously has more talent than the current CBC dramatic department. 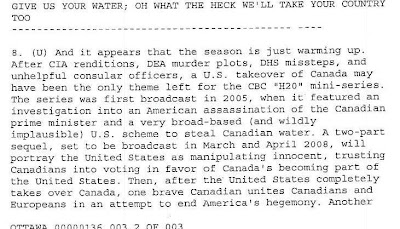 You can see the rest of the wiki-leak in question here.

CBC should be shut down... they are an assault on not only Canadians but an enemy of the best friend of this country.

Man, I had no idea these paranoid shows existed!