A newly released wiki leak of a US State Department cable generated earlier this year shows that Syria plans to provide SCUD missiles to the Iranian-sponsored Lebanese terror group Hezbollah: 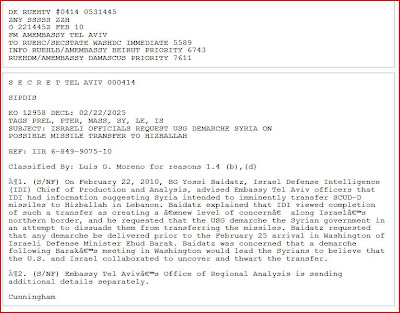 Three days later, in a cable that had this summary below, the wording of the US communication to the Syrian Vice Minister is outlined  (click here to see)

More here about the deep concern on the part of the US about this matter and of Syria's deceit.


Per reftel and other information, the Government of Israel (GOI) is concerned that Syria intends to imminently transfer SCUD-D missiles to Hizballah in Lebanon. We share this concern. The transfer of such weapons would constitute a significant escalation of a potentially volatile situation that could threaten regional stability. Embassy is requested to demarche SARG officials at the highest possible level to communicate the points below and report responses via front channel cable. NEA will deliver the same points to the Syrian Ambassador upon his return to Washington. End summary.