One of the major issues to emerge from the Ontario Institute for Studies in Education (OISE)  'Hate Thesis' scandal is the question of academic standards at OISE.

The University of Toronto, of which OISE is a faculty, has defended the thesis on the basis of academic freedom. That is a valid point about contentious ideas, which should be aired in universities. But the main issue regarding the hate thesis is the question of whether that particular thesis, which was riddled with factual errors and substandard scholarship, being accepted as the basis of an awarded Masters degree, indicates an fanatical institutional bias at OISE's Sociology and Equity Studies in Education program that places anti-Zionist ideology above scholarship.

In the Jewish Chronicle Online, British academic Geoffrey Alderman wrote a scathing critique of the Hate Thesis, discussing how it fails to achieve the minimum academic standards that should be required of something forming the basis of a post-graduate degree.

In reply, Professor Paul Franks, at the University of Toronto's Centre for Jewish Studies, wrote a letter in which he states how the significance of a University of Toronto MA degree "varies widely. In many instances it serves as a minimal introduction to the world of post-graduate study." 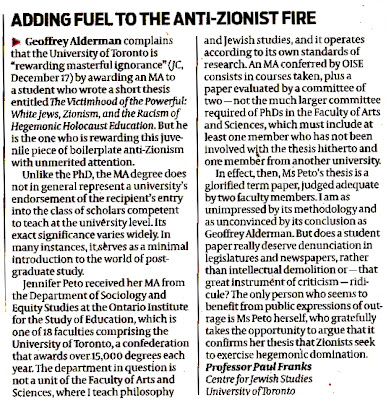 Professor Franks' defense of the University of Toronto's behaviour in this matter raises more questions than it answers.

His letter implies that the academic standards at OISE fall well below that of the other faculties at U of T.

However to have that variance and low standards in some programs denigrates the university as a whole and seems to imply that an OISE degree isn't worth much.

These are questions that the University of Toronto has still failed to adequately address.
Posted by Richard K at 1:09 PM

Prof. Franks really doesn't seem to be defending the University of Toronto at all. To the contrary, he is pointing out just how little is required to obtain a Master's degree at OISE.

I was gratified to see Prof. Alderman's comments about Peto's total lack of research. It's rather infuriating to see Peto "hypothesize" about reactions of non-European Jews when there are plenty (including my own husband!) who have been to Poland and could comment themselves. I suspect that she's also too dense to realize that the head of Canadian Friends of Simon Wiesenthal, Avi Benlolo, is a non-European Jew.

Having just received my U of Tea OISE Master's degree by e-mail, I agree with Paul Frank.

Now I should be totally qualified to get a senior tenured position in the Jewish Studies Dept.

Just for the record, my point was about MAs in general, at ANY university. It was not about the University of Toronto specifically. If you just want to bash U of T, then I suppose you will do so anyway. But if you want to understand the wider context . . .

MAs vary widely in significance. For example, I have an MA from Oxford. It is awarded for staying alive and out of prison for 7 years after becoming a member of an Oxford college. This is a residue of the medieval MA, which signified that the person already awarded an BA was now mature and respectable enough to teach. Nowadays, some MAs are 1 year degrees, while others are 2 year degrees. Some involve theses, while others are awarded on the basis of coursework.

Over the last few decades, Canada has shifted from the old British higher education system, in which the focus is on undergraduate education is seen as sufficient for an academic or professional career, to a German-American system in which the PhD is a pre-requisite for an academic career, while various other post-graduate degrees are seen as necessary for other qualifications.

The MA has an unclear role in this shift. At one time, I think, it was perceived as a significant step beyond the BA. But academics do not, for the most part, see the MA that way. In my discipline, philosophy, the MA is typically awarded as a consolation prize to those PhD candidates who complete their coursework but decide not to write, or who do not complete, a thesis. (U of T is unusual in offering separate admission to the philosophy MA.)

This is a mess. It should probably be cleaned up. One good effect of this debate about Peto is that clearning it up now seems more pressing. But it's not just a U of T mess. It's general to universities in the English-speaking world.

The European Union is currently undergoing the "Bologna Process", which is supposed to make sure that degrees with the same names given in different European countries are roughly equivalent. (This has its downside. Some valuable national traditions are being levelled down.) I am not aware of any equivalent for North America.

Universities are intellectually organized in terms of autonomous disciplines. Institutionally, this means that they have a federal structure: there are different faculties (e.g., arts and science, engineering, medicine, education ,etc.), and each faculty comprises different departments.

On the one hand, admission criteria plus overall quality of instruction will ensure that any graduate of U of T should meet a certain standard when it comes to general knowledge and exposure to critical thinking. On the other hand, specific expertise depends on the program in which the student was educated, and on the specific supervisor.

Is it not obvious that different programs are . . . different? Some U of T departments are the best in the world, or are in the top ten. Others may be in the top twenty. Any informed employer, who is interested in the expertise of the candidate, will judge an applicant in terms of the specific program and department. If the employer wants something less specific, then it may be just fine to rely on the overall quality of the U of T "brand".

Thanks for your contribution, Professor Franks. I think your letter to The Jewish Chronicle and this follow up have been most helpful and as you say, it's a mess that should be cleaned up. Having academics at the institution in question speak out in public is a critical part of that process. So far, the U of T's official response has been understandably, but unhelpfully evasive.

I was being provocative and rhetorical rather than presenting a completely fair argument when writing "How does the University of Toronto feel about the fact that prospective employers and other institutions have to evaluate a University of Toronto degree based on the individual faculty?"

You're quite right, obviously individual faculities are going to be assessed differently and people know that. A graduate from U of T's Medicine, Engineering, or Law faculties will be thought of in terms of how those faculties measure up against other similar faculties in the English-speaking world, and clearly no one assessing a U of T Engineering graduate is going to care or consider OISE standards, nor should they.

But this still leaves unaddressed the fact that the politicization of OISE is not helpful to U of T's overall crediblility, and the lack of academic standards at OISE devalues that faculty as a whole, which should be of major concern to the University and particularly to OISE's Dean.

I know people who have studied and done research at OISE's Early Childhood education programs (Institute of Child Study) and these are excellent academeic programs with some first rate people. I believe that having that standard devalued by association with programs like the Sociology and Equity Studies in Education program at the same faculty, is insulting to some of the thoughtful, diligent professors and students in serious programs at OISE.