This Saturday at 7 pm, Bloor Street United Church will be holding a fundraiser for the Sea Hitler, the boat a group of Canadian Islamists and pro-Marxist groups want to sent to support Hamas-ruled Gaza.

The Bloor Street United Church at 300 Bloor Street West in Toronto has faced allegations of being a home for anti-Semitism masked as "social justice" in the past.

It is only a couple of blocks away from the St. Paul Trinity Centre which houses groups like James Clark's anti-Israel Canadian Peace Alliance and the International Socialists and recently played host to the shill for Iran's dictatorship, George Galloway. Their two steeples along a close stretch of Toronto's Annex district are like anti-Israel versions of J.R.R. Tolkien's twin towers of Mordor and Isengard.

In 2008,  Bloor Street United hosted an event promoted by the discredited Canadian Arab Federation that according to The Jewish Tribune, displayed "viciously antisemitic reading material." 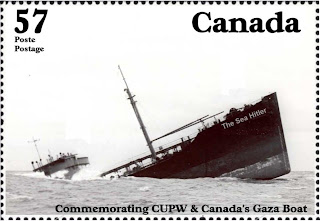 Now they are hosting another fanatical anti-Israel event to raise funds to help destroy Israel's ability to prevent Iranian arms smuggling to Hamas, a group designated as a terrorist organization by the government of Canada.

This event is sponsored by the anti-Semitic Canadian Arab Federation along with Bloor Street United's "Social Justice" Committee. A quick perusal of this committee's information suggests a concept of social justice that lines up better with the followers of Karl Marx than those of Jesus Christ.
Posted by Richard K at 2:26 PM

All I can say is...whiskey, tango, foxtrot?

Ten or fifteen years ago, at least in the US, an event like this would have drawn crowds of protesters.