Sanity lost one of its great voices today

Christopher Hitchens greatest crime, from the standpoint of radical socialists and the anti-Western left, was not just that he disagreed with them or that he consistently humiliated them with his reasoned logic, but that he ceased to be one of them. 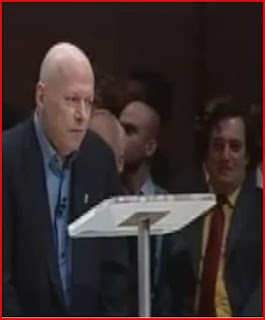 He passed today at the age of 62 from the espohegeal cancer that, for the last year of his life, took his speech but not his powerful voice that he was able to express in writing until nearly his last day.

I had the priviliege of being on stage at one of his last public speaking appearances, at The Munk Debate where he and former British PM Tony Blair argued about whether religion is a force for good in the world. Despite the obvious bond of affection between the two, Hitchens never ceased to be a ferocious combatant, despite having to pause at times because of his failing health, and his arguments  overwhelmingly won over the audience.

Hitchens' one consistent loyalty was to logic and the honesty of what he believed. The only sort of person who never changes their mind is the kind who doesn't have much of a mind. Hitchens possessed one of the great minds of our time and as he was exposed to new knowledge, he didn't reject it because it conflicted with his entrenched ideas; he absorbed it to develop, change and reason in a more complete way.

He moved from being a comrade of the Marxist left to a veritable spokesman for the NeoCon right when he saw the reality of Saddam Hussein's persecution of the Kurds. The left was more interested in their ideological devotion to opposing the so-called forces of a non-existent imperialism than in the actual lives of human beings. In too many cases, this manifested itself among western socialists who claimed to be for peace in a gleeful acceptance of totalitarian dictatorships, under which less fortunate people would be consigned. As Hitchens, in his typically concise and devastatingly honest way put it, "it's not that they're anti-war, they're pro-war, but for the other side."
He was not bound by simplistic notions of ideological partisanship. He just told the truth as he saw it, and in the process angered many whose attachment to a fixed idea was more important to reason. In the last decade of his life, his atheism was militant, if ironic for someone whose name means "friend of Christ" If the forcefulness of his disbelief did not disprove God, the reactions to it from believers bolstered his contention that such belief was irrational.
As someone who does believe in God, I found the ferocious reaction to Hitchens from people who professed to have strong faith both curious and disheartening. If God is God, then He is not an imaginary friend who vanishes when you cease to believe in Him. The benefit of having God in one's life is to those who know Him, not to God.  So why would people who claim to believe in God be upset at the disbelief at others? God cannot be proven like a scientific formula. Those who know Him must find Him on their own path. And for those who do not, what really matters is not whether they believe in God but that God believes in them.
The wealth of reason, truth, and the constant passion and battle for justice that he fought leaves me no doubt that God believed in Christopher Hitchens. Should Hitchens find that he was wrong about his atheism, I doubt he will be very disappointed.  Because if there's one thing he shared with the Creator, it's a sly sense of humor.
Posted by Richard K at 10:29 AM