Norman Finkelstein, the former De Paul University professor who is known primarily for his obsessive hatred of Israel, is the modern anti-Semite's favorite Jew. He appeals to both neo-Nazis for his sinister criticisms of  Jewish remembrance of the Holocaust, and to Islamists for his efforts to de-legitimize the Jewish state.

He possesses Naomi Klein's gift for distorting isolated, anomalous pieces of information into conspiratorial, overarching theories.  But unlike Klein, Finkelstein has a reputation for a comprehensive, indeed compulsive need for factual accuracy, even if his interpretation of fact is sometimes suggestive of a mental disorder.

However recently, he seems to have even lost that one vaguely redeeming component of his credibility.

Finlelstein has the habit of posting stories to his website, prefaced by his own acerbic comments.
Recently, Finkelstein posted a report of a talk with the noted author and commentator Mark Steyn in Toronto, with the notation, "Jewish writer warns of Third…or is it Fifth?…or maybe its the Seventh?…Holocaust!" 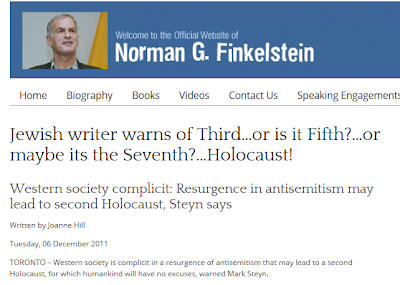 It would appear that in Finkelstein's mind, the notion that concerns about contemporary anti-Semitism could only be a by-product of some sort of hysterical thinking on the part of a Jew.

Except, Steyn, a best-selling author, syndicated columnist, and frequent host of one of America's most popular radio talk-shows is an Anglican who was baptized as a Catholic.

In his rush to attribute all the evils of the world to Jews, Finkelstein's intemperance got the better of him.  Speaking of intemperance, Finkelstein is sounding more and more like Mel Gibson did a few years ago. At least Mel had the reasonable excuse of being plastered out of his mind on tequila and had the decency to apologize. The humourless Finkelstein doesn't have that to fall back on.
Posted by Richard K at 12:27 PM

People can watch me debate Finkie on Press TV. At one point he claims the IDF rapes Arab women, yet there's not one incident like this in history. He cites useless statistics when I mention 10,000 rockets fired at Israel from Gaza, yet claims 1,500 Palis killed in Cast Lead were all civilians (most were armed terrorists. He's a liar and an academic fraud. See it all here:
http://www.presstv.ir/Program/337818.html