Liberal MP Justin Trudeau, the privileged son of former Prime Minister Pierre Trudeau, wouldn't want to be thought of as one of the ruling elite, the horrible 1% vilified by the vacuous Occupy Movement.

But with the baggage of wealth and being a member of Parliament, he actually IS a member of the ruling elite.

So how to convince his peeps that he is down with the masses!? Why, what better way than to turn his face into the ubiquitous Guy Fawkes mask that is as much a feature of the Occupy Movement as the cultish repetition of "the people's mic." 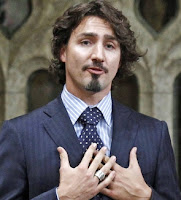 There's an old story that the beautiful but dumb dancer Isadora Duncan approached the brilliant but grizzled playwright and critic George Bernard Shaw with the offer, "We should have a child together George! Imagine what a triumph a child would be with my looks and your brains!"

"That may be so, my dear," replied Shaw, "but what if he were to have my looks and your brains?"

Every time Justin Trudeau makes the news, I'm reminded of that story.
Posted by Richard K at 6:54 PM