An irrational hatred for a good mayor

At a dinner party I attended on the weekend in the west end of downtown Toronto, the composition of  guests couldn't have been more representative of what people would expect from that area of my home town. Virtually all of them white and middle or upper middle class, comprised of York University graduates, an OISE professor, single professionals and some parents who delayed having children until a point that would have put them in the age range of grandparents a couple of generations ago. And I; aside from whom, there was a uniform political outlook that night that is euphemistically referred to as progressive.

I tend to avoid political conversations at these type of social events. Though I enjoy discussing interpretations of government policies and the possible motivation of the officials who formulate them, there are some people who become rather agitated when the facts don't bear out their emotional reactions to an idea to which they are attached. On one occasion, I heard after-the-fact from a woman I briefly dated, that at a party of hers, one of her friends became infuriated and left immediately after overhearing me say that some disadvantaged people in our society may be responsible for their own condition and it isn't the role of government to intervene in and correct every bad decision people make. Okay, to be totally honest, the way I may have phrased it may have been slightly different and may have been punctuated with a colloquial term for fornication, but that was the gist of my argument. 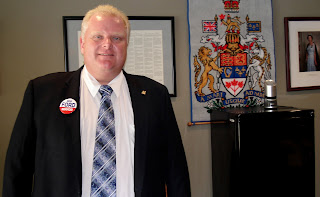 Toronto's mayor Rob Ford is a current example of how local progressives, captivated by their own emotional reactions and biases, but without any factual substantiation, have distorted reality into a pessimistic Apocalypse of societal collapse. An ex-girlfriend who works in the Social Services sector expressed the same sentiment as the party guests over drinks a few days earlier, as she righteously pontificated about how Rob Ford is destroying the city.

When I asked her exactly how Ford was supposedly destroying the city, she wasn't able to come up with a single concrete example. She talked about Ford making service cuts as a general concept, but couldn't actually name any that were implemented. What was more telling was that she could not come up with a single example of how anything this alleged Shiva, the God of Destruction who now holds Toronto's mayoralty, has done that personally affected her negatively in any way.

Rob Ford has been in office for almost 14 months and has for the first time in the amalgamated city's history brought in a budget that reduced spending from the previous year. There has been a property tax increase of exactly 0% under Ford and he has kept his promise of reducing Council expenses and eliminating the municipal Vehicle Registration Tax.

By contrast, his predecessor, David Miller imposed huge property tax increases, reduced the frequency of trash pick up while imposing, for the first time in the city's history a trash pick up fee that every household continues to pay. Miler took a lot of money out of people's mouths while giving back virtually nothing to anyone but a few of his special interest friends.

But for people who see themselves as progressive, perception and pessimism frequently trump reality. They don't like the idea of a hated right-winger having been the overwhelming democratic choice in a city they see as theirs. It results in a outlook that refuses to admit that Ford could do anything right and that he must be derided at all times, not for what he's done, but for what he might do.

I say this as someone who voted for David Miller the first time he ran for mayor. His opposition to the Island airport tunnel struck me as a reasonable approach, but more to the point, his opponents were uninspiring. But his terms in office were a huge disappointment because he grew government and government spending while gouging Toronto's tax base. That was the reality of the mayor who preceded Ford. The current mayor may be less smooth but he is more capable and committed to serving the public, and I'll take a poor perception over a bad reality any day of the week.
Posted by Richard K at 12:08 PM