You might remember U of Toronto professor Rupaleem Bhuyan, who was described by colleague Professor Ernie Lightman as having facilitated an anti-Semitic "Jew Count" in her Social Work post graduate class, and according to the director of PhD programs at the Factor-Inwentash school of Social Work at U of T, said " ‘racialized’ students come from underprivileged backgrounds and were justified in not wanting to be around old Jews because they are rich and would make them uneasy. " and added that "the donor plaques at the university were all from rich Jews", which she felt proved her point.

The U of T demonstrated either extraordinary cowardice by retaining her, or perhaps shares that point of view, but doesn't want to admit that too loudly for fear of forfeiting the Jew money they take in every year from benefactors like Peter Munk, Jeff Skoll, Charles Bronfman, the Reichman family, etc, etc. Or perhaps because Ms Bhuyan is a visible minority, she gets a free pass on the racism issue, since as we know from the University's Ontario Institute for Studies in Education (OISE) faculty, only whites can be racist. 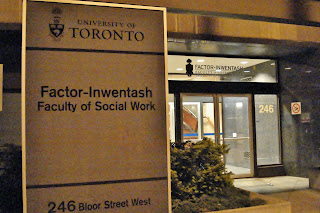 Whatever the reason, with the imprimatur of the University of Toronto, Bhuyan is popping up as a speaker at conferences, perhaps in the hope that by the time of her next review, the controversy will all be forgotten.
If the University of Toronto keeps hiring people like that or sweeping their public classroom bigotry under the carpet, perhaps Canadian Jews might consider an alternative destination for their largess.
Posted by Richard K at 8:37 AM