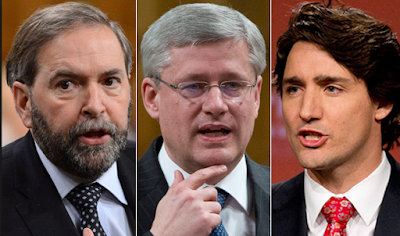 Two new national election polls differ widely on whether the Conservatives or Liberals are leading in with less than two weeks before the Canadian election. The Mainstreet Research/Postmedia poll has the Conservatives at levels close to enough to have a majority government, while the Nanos poll has the Liberals leading the Tories at 35.0 to 31.5 percent.

But all polls agree that the NDP has taken a massive plunge since the early days of the election campaign when they were the frontrunner, and they are virtually assured a return to 3rd party status. Despite NDP leader Thomas Mulcair's pledges to balance budgets, no one really trusts a party filled with the ranks of admirers of socialist dictators like Fidel Castro and Hugo Chavez, such as NDP "star candidate" Linda McQuaig, to do anything but massively increase spending and taxes.

As Stephen Gordon noted in the National Post, the Harper government has done well enough with Canada's economy that the other parties are not going to want to frighten voters by changing course, at least in their public declarations. It may follow to reason that the voters will think the same way and decide to hand the Conservatives another majority in order to protect Canada's economic security.
Posted by Richard K at 11:05 AM