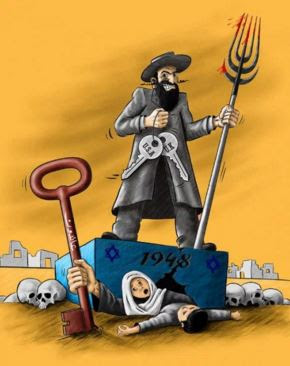 The so-called Palestinian solidarity movement is a euphemism for genocidal fascism. The Palestinian leadership has made it clear they will not allow Jews to live in Palestine, whereas Israel's population is 20% Arab Muslim who have full voting rights. The Charter of the Palestinian government of Gaza calls for the extermination of Jews, and both the Hamas government in Gaza and the Palestinian Authority in the West Bank, as well as Palestinian NGO's routinely use Nazi-style anti-Semitic incitement in its official media. Yet the Palestinian fascist movement's propaganda calls Israel "an apartheid state."

These disgusting people also believe they have a right to decide what other people are and are not allowed to hear and think, and in typical fascist tradition will try to intimidate anyone they oppose:

...Khaldi was about 10 minutes into his presentation when the protest began.

“He didn’t get into anything political. He started off by saying that protesting an event like his is a waste of time, saying, ‘I’m not a politician, I’m just here to share my experience and my story.’ He gave a few examples of the things he’s trying to do to foster peace between Israelis and Palestinians,” Sher said.

In a video uploaded to the Palestinian Solidarity Group’s Facebook page, the protesters can be seen interrupting Khaldi by standing in their seats and taking turns shouting slogans at Khaldi...

"...He came to our campus to speak about minority rights in Israel (as if those exist), and we as pro-Palestinians refused to allow a Zionist to lead the discussion on such a topic. After we left we held a talk outside the room to dicuss what is really happening in Israel, and opened the floor to intersolidarity. The pro-Palestinian voice is in charge of leading the discussions on Palestinian human rights on our campus, not Zionists."