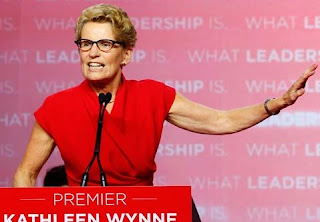 As part of the Ontario government's plan to fight carbon emissions, Premier Kathleen Wynne has proposed legislation which will require Ontario citizens to have personal carbon dioxide monitors surgically implanted.

"Climate Change is the most urgent issue in the entire history of the universe," Wynne said at her year end speech at Queen's Park yesterday, adding, "unless we take drastic measures, we are headed for a global apocalypse of either warming or cooling, depending on the weather, by 2018 unless my government gets re-elected by then."

To encourage Ontarians to reduce their individual carbon outputs, the new legislation will mandate that every citizen be fitted with a small carbon emissions detector which will be implanted at the base of the nasal cavity. The unit will transmit the level of carbon dioxide exhaled by each person to a government data-capturing system, and personal carbon tax bills will be issued quarterly.

Wynne described the surgical procedure required to implant the monitors as "a minor inconvenience."

"It's a small price to pay in order to save the planet from the impending catastrophe of a climate, which due to man-made causes, changes like the weather and threatens our very survival as a species."

According to Wynne, adults will be retrofitted with the implants as a day-surgery procedure which would require less than two-hours of non-OHIP covered billing. Newborns will be implanted with the devices prior to being allowed to be removed from hospital post natal care and Wynne said the procedure for them would be no more invasive than a circumcision. The comparison irked anti-circumcision activists, who describe themselves as "intactivists."

"We fully support nasal monitors and all measures to save the planet by reducing the amount of carbon people exhale," said Intactivist spokesperson Bartleby Gobknobbler. "But we are outraged that the Premier would try to normalize the severing of the foreskin, which is the most important part of the human body, and are being brutally harvested by Jewish doctors for use by Israel's military in the oppression of Palestinians."

Wynne vehemently denied charges from Progressive Conservative leader Patrick Brown that the new nasal carbon monitors are a new tax grab by a government which is the largest non-sovereign debtor in the western world. "It was only a matter of time before the desperate, incompetent Wynne government found a way to tax the air," said Brown.

"It is not a tax" Wynne responded when asked about Brown's charges at Queen's Park yesterday. "It's a revenue tool. And it is absolutely not an air tax. The people of Ontario will always be free to inhale as much air as they want under my government. The revenue tool applies exclusively to the carbon dioxide people exhale. My plan will contribute to saving the planet by encouraging the citizens of Ontario to reduce their excessive personal carbon emissions."
Posted by Richard K at 9:34 AM

You missed half the story!

If you are confirmed as "conservative" you get the full CO2 emission reduction: they crazy-glue then sew your nostrils, mouth and arse shut to make sure you have zero carbon dioxide and methane emissions.