Turkey has become a 5th column in NATO 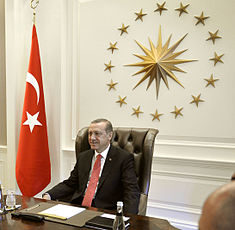 It's been an open secret for over a year that the Turkish government headed by Recip Erdogan had been aiding ISIS through oil purchases and facilitating entry of jihadists into Iraq and Syria to fight for the Islamic State. A shared antipathy for the Kurds with ISIS and Turkish President Erdogan's Islamist beliefs, have made Turkey, while it plays both sides of the conflict with ISIS, effectively a 5th column within NATO.


Russia’s defense ministry said on Wednesday it had proof that Turkish President Tayyip Erdogan and his family were benefiting from the illegal smuggling of oil from Islamic State-held territory in Syria and Iraq.

Moscow and Ankara have been locked in a war of words since last week when a Turkish air force jet shot down a Russian warplane near the Syrian-Turkish border, the most serious incident between Russia and a NATO state in half a century.

Erdogan ressponded by saying no one had the right to “slander” Turkey by accusing it of buying oil from Islamic State, and that he would stand down if such allegations were proven to be true. But speaking during a visit to Qatar, he also said he did not want relations with Moscow to worsen further.

At a briefing in Moscow, defense ministry officials displayed satellite images which they said showed columns of tanker trucks loading with oil at installations controlled by Islamic State in Syria and Iraq, and then crossing the border into neighboring Turkey.

The officials did not specify what direct evidence they had of the involvement of Erdogan and his family, an allegation that the Turkish president has vehemently denied...