There is a huge mural in a public space at York University that implicitly encourages violence against Israelis while denying Israel's right to exist. It depicts what is obviously a Palestinian, clutching a pair of large rocks behind his back, while gazing at Israel and wearing a map of  Palestine in which the Jewish state has been eradicated. A number of Israelis have been murdered by Palestinian rock-throwers. 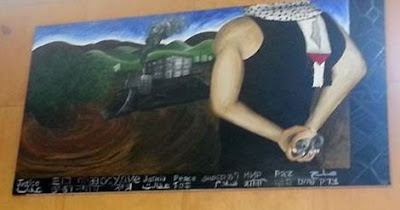 Paul Bronfman is the Chairman of the company which own William F. White International, Canada's most prominent supplier of professional film equipment and resources (like Canada's Panavision). William F. White currently provides a huge amount of resources to York's film department, but that support will be withdrawn if the terror-encouraging mural is not removed immediately, according to Bronfman.

York University has a significantly-sized Jewish student population, but it is also a notorious hotbed for Islamist extremism, where anti-semitic occurrences are common, and where support for terror groups like Hamas is widespread among its radical, student union-financed groups.

The report below is from The Friends of Simon Wiesenthal Center:


Paul Bronfman is a busy man. As the Chairman and CEO of Comweb Corp and William F. White International, as well as the Chairman of Pinewood Toronto Studios, Mr. Bronfman is entrenched in the details of providing professional production services and technical expertise to Canada's motion picture, theatrical and live event industries. He is also a voting member of the Academy of Canadian Cinema & Television, which presents the Canadian Screen Awards - the most prestigious award show for Canada's top films and TV series.

Torontonians have become accustomed to seeing William F. White production vehicles, servicing local film and television shoots, parked on city streets in every season and at every hour of the day. Bronfman is, in essence, the go-to guy for producers looking to shoot in Canada.

He is also a committed Director of Friends of Simon Wiesenthal Center (FSWC) who is truly leading by example and standing up for Jewish and pro-Israel students, as well as the wider Jewish community, in openly confronting the ongoing manifestations of anti-Israel activity and veiled antisemitism at York University.

This week, after learning about a controversial poster promoting violence against Israel hanging in the campus student center, Bronfman called university president Mamdouh Shoukri to discuss concerns about the tacit support for hate and anti-Israel terror.

"I thought, I am in a position to put some pressure on the people at York who are allowing hate propaganda to be displayed," Bronfman explained, noting that during the phone conversation, which also included the Dean of Law and the VP Advancement, "I was given a bunch of legal jargon.  Shoukri said the university had gotten a lot of complaints, but all I received were regurgitated political statements - nothing of substance; nothing that showed the university cared in any way about the students harmed by the hate this mural represents."

But Bronfman, hailed by the Toronto Star as one of the industry's most outspoken advocates, provides considerable support  to the university's Cinema & Media Arts department, - support that is about to be withdrawn.

"The upshot is that if that poster is not gone by the end of day today then William F. White is out of York. York is going to lose thousands of dollars of television production equipment used for emerging student filmmakers, access to technical people who do education and student training and student seminars, workshops and open houses at William F. White Center that help them develop the hard skills needed to fill industry infrastructure positions like gaffer or grip: they will no longer be invited. York University will be persona non grata at William F. White international until they take that poster down," Bronfman emphasized.

"This will be a huge loss for students  - it's not just about the equipment but the access to training that Paul is planning to withdraw - there are no other private corporation that offer this scale of mentorship and training to students like William F. White does," explained FSWC President and CEO Avi Benlolo.

"I know how difficult this step must be for Paul - he is very dedicated to helping the next generation of filmmakers and is such a cheerleader for the Canadian film and TV industry but - at the end of the day, I am so proud to see him taking a stand for our community and for all students who feel threatened and intimidated by this hateful poster, and neglected by an administration that has never expressed any sympathy or understanding for their concerns." Bronfman is hopeful this step will resonate with community leaders who are on York's Board of Governors to resign and withdraw funding from York.

"Shoukri is willing to lose significant educational opportunities for his students to keep this anti-Israel, antisemitic poster, which is tarnishing the university's good name. Why is he willing to do this? It makes me sick and should be offensive to all Canadians," he maintains.

Asked whether he thinks his efforts will make a difference, Bronfman responds, "I think if  they really cared about the issues of hate propaganda and antisemitism they would do the right thing and take the mural down."

Editor's Note: As of the writing of this article the mural has not been taken down

Has Shoukri ever publicly stated what is his view of the Muslim Brotherhood, an organization very popular with Egyptian engineers?