Why is the Trudeau government sponsoring an extremist conference promoting hatred of Jews and insane conspiracy theories? 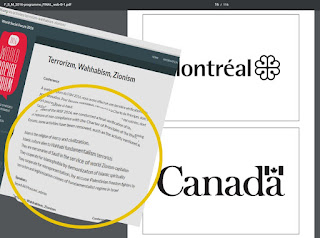 That a large gathering of groups extolling violence, Marxism, anti-semitic and anti-American 9/11 conspiracy theories is set to take place at McGill University in Montreal next week is odd. But what takes it beyond being merely odd and into the realm of being an outrageous breach of responsibility, is that they are receiving official sponsorship from the governments of Canada and Quebec.

The "World Social Forum" claims its goal is to "gather tens of thousands of people from groups in civil society, organizations and social movements who want to build a sustainable and inclusive world.." However that inclusiveness does not extend very far. The groups and individuals presenting at the the event are almost exclusively limited to radical Marxist, anti-American, and anti-semitic organizations that promote extreme, hateful, and violent ideologies.

If Truth In Advertising Laws covered events like the World Social Forum, it would have to call itself the International Socialist Forum. Although in describing some of its facets, National Socialist Forum might be more apt. Among presentations at the World Social Forum is one called "Terrorizm (sic), Wahhbism, Zionism" which postulates the anti-semitic conspiracy theory popular amongst radical Shiite Islamists that Saudi Arabian Wahhabism, an extreme version of Sunni Islam, is actually is a Zionist plot. Among the resources that the World Socialist Forum have to make that argument is a cartoon reminiscent of Nazi anti-Jewish propaganda. (Update - on Saturday afternoon, embarrassed by being exposed for its antisemitism, the World Social Forum finally removed the Nazi-like cartoon from its website. However, the forum's many extremist and antisemitic seminars remain on their schedule.)

That seminar is one of at least a dozen at the forum whose object is the demonization, boycotting and delegitimization of Israel, matching the description of Jew-hate formulated by the Canadian and International Interparliamentary Coalitions for Combating Antisemitism.

The fact that Canadian taxpayers, through the Trudeau government, are subsidizing hate speech is bizarre at the least. In Quebec, a person can be prosecuted for telling sarcastic jokes about disabled people. Yet evidently, if someone  in complete seriousness wants to promote Jew-hatred, they can get a Quebec government grant. If these government partnerships with the World Social Forum stand in the light of being exposed, it also has the potential to disqualify the government from any prosecuting future Hate Speech offenses, as few are as egregious as the ones to which the government is cooperating in giving a platform. 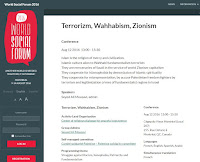 Other seminars at the World Social Forum include one promoting lunatic, long-discredited anti-American 9-11 conspiracy theories and others extolling class warfare, violence and terrorism.

Among the speakers at the Forum are a number of terrorism apologists, including fanatical propagandists Eva Bartlett and Ken Stone, who are also routinely featured speakers at Toronto's annual al Quds Day rallies, which are anti-semitic gatherings held in the summer calling for the killings of Jews and terrorism against Israel.

Clearly the government and many of the sponsors did not do due diligence before agreeing to partner with and sponsor the World Social Forum. But now that they are aware of what they are involved with, if they do not immediately withdraw their support, it is tantamount to Justin Trudeau's government playing accomplice to violent, hateful extremism, and using public money to do it.

Because the Canadian Government has been infiltrated by the muslim government at the highest levels including Human rights councel
September 20, 2018