Jack Layton's unsuccessful designee to the mantle of federal NDP boss spent a lot of money and incurred a lot of debt in his failed leadership campaign.  Brain Topp was one of the old Gang of Four, the unofficial policy brain trust (if one can use that expression referring to our federal socialist party) along with Layton's wife, Trinity Spadina MP Olivia Chow and the aged, cranky sage of the west , Ed Broadbent. It was that committee who crafted Layton`s `deathbed letter`of inane platitudes that has become some sort of Sermon on the Mount to the sub-par intellects of the left.

As both a gesture of party solidarity and as a means of solidifying his control at the top, Official Opposition leader `Tin Foil` Tom Mulcair is joining Chow and Topp at a fundraiser to help pay off his former rival`s campaign debt.  According to the NDP email,  `all proceeds will be donated to retire Brian Topp`s campaign loan - part of our party`s commitment to clear the deck and then focus on the next federal election so together we can defeat Stephen Harper.``

The laws around campaign debt are murky and confusing in Canada. Even so, the NDP`s offer of a generous tax credit for paying off Brian Topp`s bills sounds pretty hypocritical. The so-called Next Step Dinner has tables which can be purchased for $1000 and taking money out of the tax base to benefit a party that wants higher taxes and more public spending. If you want Peking Duck dressed with a sour sauce of resentment and a stale fortune cookie predicting years of unwarranted entitlements, then this is the dinner for you. 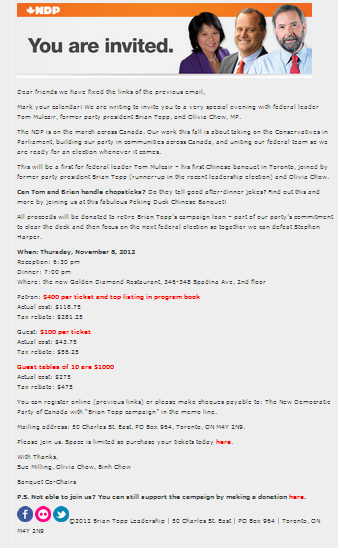