No news item in the last month has created more traffic and buzz than the release of tapes of Mel Gibson venting rage and hurt at the mother of his young daughter.


Most of the commentary has been devoted to criticism of Gibson, with the popular verdict in his unfair trial-by-media being that he is an abusive racist. In the minds of many, the latest revelations are the final confirmation of the instability and bigotry of the person whose drunken, anti-Semitic tirade directed at a Jewish LA County Sheriff made headlines around the world in 2006.
But what does all this attention devoted to Gibson say about the rest of us?

It's no revelation that as a society, North America is obsessed with celebrity gossip. How many magazines  and websites are devoted exclusively to that subject? The Mel Gibson items on this website have generated a far greater amount of traffic than any others.

One of the reasons we obsess about celebrities is because, through seeing them in our homes on television, and through recognizing them, we feel we know them. The pathological media flaunting of stories about celebrities' weight, appearance, and behaviour gives strangers more access to details of their lives than most people know about their own personal acquaintances or even friends and relatives.

But those familiar with celebrity culture can tell you that the people you see in the movies, and on TV, be it in dramatic performances or in interviews, are not the real people they are behind closed doors.

Celebrities on camera are always performing. Their persona is their business.

If Tom Cruise came over to your house, you'd meet a charming, thoughtful, engaging person who won't jump on your couch. Most movie villains are quiet, soft-spoken people who wouldn't dream of hacking you to death with an axe, eating your liver with fava beans, or blowing up your planet with the Death Star.

Mel Gibson is going through a bitter romantic break-up and battle for custodial rights of his young child. These are some of the most trying, stressful circumstances a person will go through and it doesn't always bring out the best. If everyone had the worst moments of their life publicly broadcast and ridiculed, people would be less likely to be judgmental about Gibson.

I am as guilty as anyone in that regard, having compiled the publicly available uncensored tapes, so let me offer this as a means of contrition.

We all have our off-the-handle moments. Very few of us have them publicised. Mel Gibson is no worse than many of us who have said stupid things in a moment of passion that we have regretted later. In Gibson's case, both in 2006 and now, what he said was said privately and not meant to be heard by anyone other than the person he spoke to. The tapes made by Oksana Grigoieva are exploitative and very likely illegal. She is the one who has coldly and calculatedly manipulated the perception of events.

And the media has chomped at the bait.

Yesterday, in the Globe and Mail, Lynn Crosbie said there\s "nothing wrong with him that a Louisville Slugger couldn't fix" before viciously castigating Gibson for what was said on the tapes. 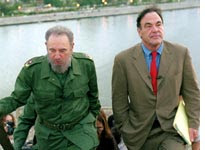 While Gibson's taped comments indeed merit condemnation, and his racist remarks are reprehensible, they were private comments blurted in fits of anger, and that context is lost.
What is far more offensive in the realm of stupid, racist comments in the media this week, are those of has-been director Oliver Stone.

Stone, whose directing career has been on a precipitous decline for more than two decades, and whose obsession with conspiracies rivals those of the most disturbed psychiatric patients, gave an interview to London's Sunday Times where he said attention to the Holocaust was due to, "The Jewish dominated media. There is a major lobby in the United States and they're hard workers. They stay on top every comment, the most powerful lobby in Washington."

Those were Stone's comments, in his cold, dispassionate, on-the-record words.

Mel Gibson is an actor whose private drunken rants were never intended to influence public policy. Nor were they on subjects he publicly engages in with his work. Gibson's movies are intended to entertain and nothing more.

Stone is a person who has tried, through his work, to influence the political and social attitudes of the public. Now it seems, he is devoting those energies to defend the reputations of Hitler and Stalin.

Stone, whose last film was a documentary called South of the Border, was a the not-well received paean to Venezuelan Supremo, Hugo Chavez. Stone has been ingratiating himself to Iranian dictator Ahmadinejad, whom, it sounds like, may have helped him with his understanding of the Jews.


When looking at the two in perspective, Mel Gibson's mistakes were private. They don't affect us and they were never intended to. He deserves forgiveness.

Stone, on the other hand, who publicly, intentionally seeks to vilify a race of people while undermining democratic countries in favour of dictators, is reprehensible, unrepentant and merits little other than scorn.
Posted by Richard K at 2:19 PM