Scenes from a Protest

There was a protest yesterday afternoon at the north part of Queen's Park, in front of the Ontario Legislature, where a modest-sized crowd of about 1100 demanded an inquiry into police tactics during the G20 convention in Toronto.

The usual suspects were there, with the MC being Judy Rebick, who lead the crowd in inane chants that sounded like they were composed by an uncreative 8 year old.. (video uploaded through Blogger/click the play button):


One of the chants Judy taught the crowd was indicative of the aged activist's lost grip on relevance: "I've got a Vietnam-like chant I want to teach you: one, two, three, four, we won't take this shit no more!'

A few in the crowd muttered it a couple of times at Rebick's prompting from the microphone, but most seemed embarrassed by her juvenile composition and her pathetic attempt to invoke the dated single victory of her generation of activists. A victory that predated the birth of most of the crowd. 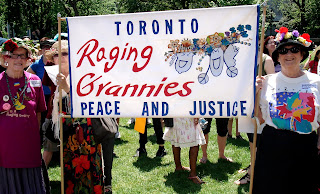 But not all. Four members of The Raging Grannies made an appearance. They weren't exactly raging, but they were very nice and grandmotherly. Now if they really want to be popular, they should bake some cookies and bring them to their next protest. 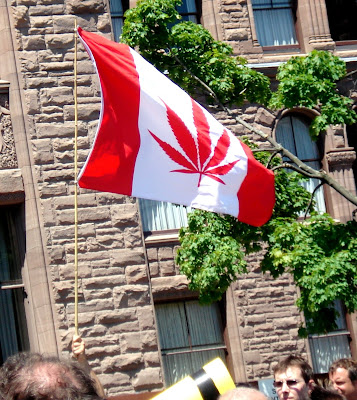 There was a funny incident were I spoke with the guy carrying this classic American Revolutionary Flag: 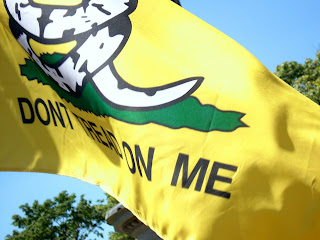 I jokingly asked him why he was carrying a Tea Party flag, and he explained he was up from the US and
happy acknowledged that indeed the Tea Party uses the "Don't Tread on Me" flag as a symbol of opposition to excessive government control.
We were overheard by some aggressive young lesbians in their 20's who became agitated at the presence of a Tea Party symbol at their socialist action against the oppressive forces of capitalism. I explained to them that the flag was originally created during the American Revolution as a symbol of resistance to state tyranny, and then the whole notion of it being 'American' bothered them, but from that point, they confined their distaste to relatively muted grumblings.

The would-be rabble-rousers speaking on-stage spent a lot of time trying to inflame Gay passions against the police and "capitalist oppression" and there did appear to be an over-representation of the sort of crowd one would expect at a "Queers Against Israeli Apartheid" meeting.
Speaking of which, 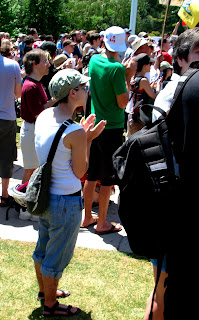 I for one am always impressed when a woman has thicker and darker leg hair than me. Quite a few women at the protest outdid me in that regard, such as the one with the white top in the picture to the left, whose calves you can see in the close up below. (Warning: I hope you're not eating while you look at this) 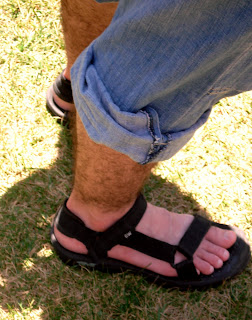 And as far as other familiar faces go, these people were here.. 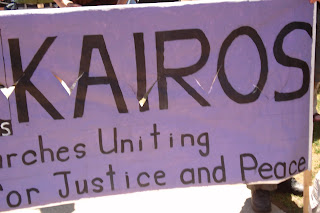 As you can see, KAIROS was critically hurt by having their federal funding eliminated. Their sign really sucked.
But some people who haven't spent the last few years relying on government largesse were able to use their ingenuity and talent to come up with more imaginative efforts: 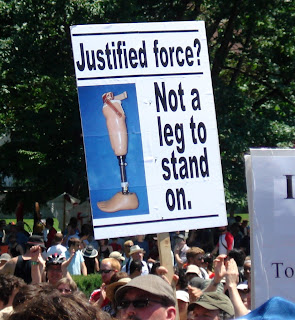 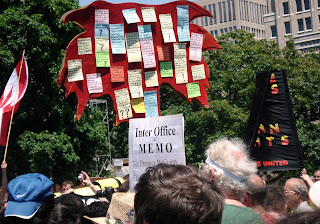 In fact, with the question tree (above), its creator tried so hard to get so many points across, it all became indiscernible and irrelevant. Perhaps a good metaphor for the entire protest. 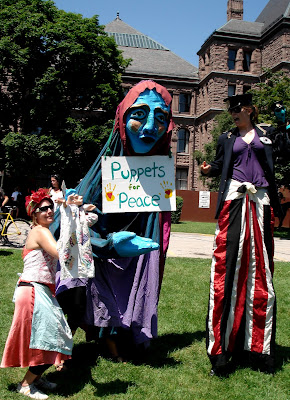 I did really enjoy this group of three from the paper puppet theatre, who got more media attention with their side show on the lawn than most of the speakers on stage.  While I wouldn't presume to challenge their sincerity, they didn't seem to have a comprehensive grasp on the reason for the protest and I wouldn't be surprised if their appearance was more clever marketing than outrage at the police. 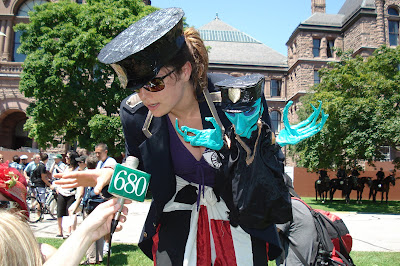 The police who were present at the Queen's Park portion of the protest I saw numbered all of seven. Three on bicycles and four on horseback. They were remarkably good-humoured, particularly considering they had to endure a hot afternoon of ferocious denouncements of their profession. 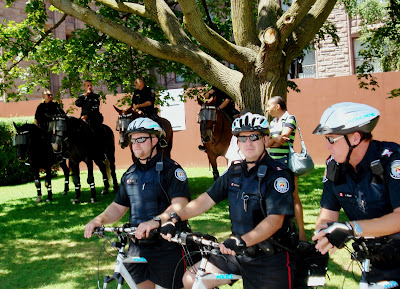 The grand finale to the event was when Syd Ryan took the stage. The Labor leader gave a performance of frantic demagoguery. Hysterically screaming into the microphone in a frenzy of fear-mongering, Ryan made ludicrous comparisons between the police in Toronto during the G20 and British military police killings in Northern Ireland in the 20th Century. Here are some of his shrill theatrics I caught on video
(video uploaded through Blogger/click the play button):
The numbers of the assembled group formed but a fraction of the numbers attending the upbeat Afrofest, occurring simultaneously on the other side of the Legislature Building, in North Queen's Park. This protest event was populated in about an even mix of two age groups, middle-aged verging on senior citizens and people of about student age in their late teens/early twenties. Looking out upon the inconsiderable gathering forming the anti-police protest, one thought struck me more than any other, and maybe you can guess what it was from looking at these last two pictures and the ones that preceded: 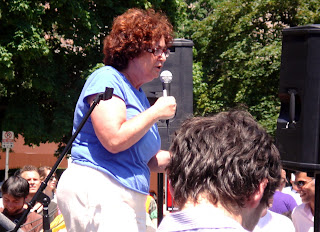 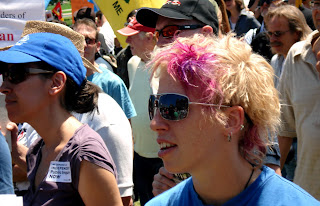 This event had speaker after speaker ferociously denounce "state and police oppression" and "capitalism" and a few other expected things with a religious fervor. In fact, at times the event took on the appearance of a bizarre parody of an evangelical church service with some of the audience passionately parroting the last words of the speakers' sentences.
Speaker: "We endure this oppression every day!"
Followers: "Every day!"
But what really struck me, looking out at, as well as mingling with and listening to the crowd and the speakers who were denouncing class, race, sexual and political oppression, was that here, in the heart of the heart of the most multicultural city in the world, in one of the freest societies to have ever been, that virtually one hundred per cent of this gathering was comprised of white, middle-class socialists.
There are legitimate concerns about state abuse of power during the G20 convention in Toronto. They merit serious investigation. Unfortunately, the protesters most worked up about the issue are the ones most likely to undermine the credibility of these concerns.
And with that, I decided I'd had enough pontificating for one afternoon and went to the fun side of Queen's Park to enjoy Afrofest with real people. I'll put some of those pictures up later.
All photos and video in this post © 2010 Eye on a Crazy Planet
Posted by Richard K at 7:33 AM

You went to a protest where over a thousand people demanded an inquiry into police tactics during the G20 and your primary focus is insulting their appearence? Nice maturity. How does your smug attitude help exactly? Why do you bother? Is this supposed to be informative or just entertaining? What's your profit motive here? Who gains from this kind of shallow, effortless mockery of "legitimate concerns"? Seriously, grow up.

I appreciate the comment, harry. My response is that if you look at the coverage of this particular protest event from major media outlet sources, I don’t think you’d find more substantive coverage of what was actually said beyond “protesters call for public inquiry of police actions during G20.”
This item actually comments on and provides video footage of what was said.
The point of my blog, and I would suggest citizen journalism in general, is to provide coverage that the mainstream media doesn’t usually provide, and I don’t think you can dispute that you got that here. (And that is my “profit motive”, as you put it)
But other than that, beyond the sarcastic observations of the protesters, is something I think worth noting. The people who made up the majority of the crowd and what they represent, and the participation of perennial and largely irrelevant protesters like Judy Rebick, who gave a slight variation of the same speech I’ll been hearing for years, largely undermined the very legitimate causes of the protest.
I think that anyone who had or feels they had their rights violated by the police during the G20 protests should be entitled to every legal recourse available. Personally, i think individual complaints and perhaps a class-action law suit would be a more effective and honest means of dealing with it than an inquiry into overall police behaviour, which is more likely to be politicized than to address actual misdeeds. But whatever happens, railing against “capitalist and state oppression against ..(fill in the usual list here) ” was worthy of the mockery with which I treated it.
And as for growing up, I’ll get around to it when I feel like it. And if that means losing my sense of humor, I’ll probably never feel like it.