Yesterday, in his cluttered office on the second floor of Toronto's City Hall, Councilor Rob Ford (Etobicoke- Ward 2) sat down with me for half an hour to discuss issues affecting the city and his upcoming mayoral campaign. 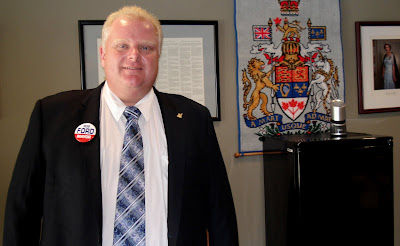 With his mobile phone always in hand, Ford is a man who is hectically engaged both in council business and the mayoral race in which he is the current front-runner.

We discussed a number of issues ranging from corruption at city hall, the role developers play there, arts funding, his campaign and how others see it, and specifics on how to reduce municipal spending.

It was an entertaining but somewhat disjointed conversation. Yesterday was a particularly trying one for Ford. Earlier that day, The Toronto Star had printed an article which included allegations that Ford, who volunteers as a high school football coach, had been asked to discontinue coaching at Newtonbrook High School in North York following a physical altercation with a student nine years ago, in 2001.

Ford told me he was advised by his lawyer not to comment on the matter, but he was adamant that he never has nor would physically engage with any student. What made his defense believable was that during our conversation, he was continually taking calls from his brother and campaign manager, Doug, and other friends and aides who were frantically engaged in attempting to locate the student he was alleged to have assaulted, so that Ford could set the record straight and clear his name.  Ford called the allegations of his assaulting a student, "slanderous."  Based on a subsequent article published by the Star today, their lawyers and editors may have realized the same thing.

Ford observed that the Toronto Star is "not a fan" of him. It should be noted that one of Ford's chief rivals in the mayoral race, Rocco Rossi, has a biography that includes his position as a Senior Executive at the Toronto Star. That suggestion of bias by Toronto's leading daily newspaper was borne out by an article published today under the headline "Teacher asked Rob Ford to leave," which in essence retracts the earlier allegations.

Today, the Star describes the former head of physical education at Toronto’s Newtonbrook Secondary as saying, "there was absolutely no physical contact between Ford and the student, after Ford pulled the teen off the field after a bad play during the 2001 game."

I asked Ford about the surfacing of this, combined with the bizarre and highly publicized phone call between him and Deiter Doneit-Henderson. In that 55 minute call where Doneit-Henderson twice told Ford he could "see his house," Ford is taped suggesting the troubled caller might try to get the OxyContin he wanted on "the street."

One of the things I enjoyed most about Rob Ford is that he appears to have an internal conflict between being a politician who needs to exercise diplomatic discretion and a earthy, honest, regular guy who wants to be upfront and say how he feels. Overwhelmingly, the honest, regular guy wins out and he proceeds to comment about the things he says he's not going to comment on.

Ford shook his head at the mention of Doneit-Henderson, and did not want to comment specifically other than to say he felt sorry for him, then added that when someone says repeatedly that they can see your home from where they are, in an agitated state, like that of Doneit-Henderson, it was grounds for fear. This subject came up when I let Ford know that Doneit-Henderson, or someone purporting to be him, recently had posted some unusual comments in the public forums section of the radical leftist website, rabble.ca.

With Ford placing well in the polls, the surfacing of the unproven allegation of an incident purported to have occurred nine years ago is suspicious. Ford characterized it as a "smear campaign."

Discussing specific ways to cut spending at City Hall, Ford reminded me that 70% of municipal spending goes to salaries. He said that rather than lay-offs, restructuring and attrition would be able to reduce a workforce that has grown by 7000 employees in the last few years. Combined with the privatization and outsourcing of garbage collection, that would result in hundreds of millions of dollars in savings for Toronto taxpayers.

Ford rattled off some of the waste and unnecessary spending currently underway at City Hall, including 45 million dollars planned for an unnecessary renovation of Nathan Philips Square. I was very surprised to learn that the city spends sixty thousand dollars a year on buying wine and thirty thousand a year on cigarettes for the homeless, and one hundred thousand a year on buffets for city council meetings. These were the types of waste that Ford pledged to eliminate.

There is a seldom-discussed practice in the civil service that is known to lead to wasteful spending. Departments operating on fiscal year budgets tend to go on spending-sprees at the end of the year if they have not spent their full budgets. This is because any funds not spent by that time are returned to public coffers and managers are fearful that if superiors reviewing budgets see that a department has not spent all its allocation, that amount might get cut the next year. In the public sector, unlike the private, there is no requirement to make a profit and so they have a paradoxical incentive to spend, rather than save money.

Raising this issue with Ford, he suggested that a way to deal with it and encourage savings is to give municipal employees a cash bonus of one or two percent of their salaries if their departments meet spending reduction targets. This would provide incentives and bonuses similar to those in the private sector and is a unique position among the current candidates.

I asked Ford point blank if he thought there was corruption at City Hall. He didn't hesitate to answer "yes."

He discussed theft and improprieties that come before the Audit Committee and have resulted in firings and Ford also characterized, in a clear reference to Councilor Kyle Rae, how the spending of $12,000 of public funds on a retirement party could be described as "corruption."

Other matters Ford discussed were the priorities of fixing Toronto's crumbing streets, where most roads have not been resurfaced in years, and the need to improve public transit. He repeated his well-known campaign positions of eliminating the land transfer and municipal vehicle registration taxes. When asked about a possible property tax freeze for senior citizens, he said the city could not afford to commit to that but promised that he would not allow property taxes to be raised more than 2%.

Unlike some opposed to the seemingly unfetterd rate of development in the city, Ford as mayor would not attempt to convince the province to scrap the Ontario Municipal Board. He sees it as a useful appeals body that has shown some value as a balance against political interference. Though Ford is generally considered pro-business, he often comes up against the developers who seemingly have free access to every corner of city hall. Ford's position is, "whatever the neighbourhood wants is what I want. If the residents are opposed to development in their neighborhood, then it's my job to stand up for them in council."

Arts funding was another subject that came up. Ford is probably the least popular among Toronto's entrenched arts community, who are fearful of any reduction to the grants system which is, in effect, a welfare system for an established clique.

The suggestion of the city using arts funding to buy art and therefore help all Toronto's artists who show merit and acquire equity for the city, rather than to fund artists, was one he found interesting. While Ford made no commitment to it, said it was something he would give serious consideration to and decide before the election.

I asked Ford who he thought of as political role models. He took a moment of consideration before he came up with three names: Doug Holyday, the current city councilor and former Mayor of Etobicoke who first encouraged Ford to run for city council. The next was Mississauga's long-serving mayor, Hazel McCallion, whose stamina Ford admired; and Ford's father, Doug, who was a provincial MPP.

The most recent poll put Ford in the lead in the mayoral contest,  but with numbers in the high teens and only a couple of points higher than his nearest rival, former provincial Heath Minister, George Smitherman.

As of now, none of the five leading candidates, a group that would also include Rocco Rossi, Sarah Thopmson and Joe Pantalone, has emerged as a clear leader with anything resembling a substantial plurality in the polls. When questioned about a strategy going forward to get to that point, Ford responded that of all the mayoral candidates, he is the only one with both public service and private business experience and both are absolute necessities for being a successful mayor. It is a point he will be emphasising along with playing to his proven strength of appeal to voters concerned about reducing municipal spending and taxes.

Finally, I asked Ford about one of the criticisms that was voiced by some of his colleagues about his spending so much time personally calling and responding to constituents who contact him. They say that it's something that a mayor, with 3 million constituents, can't possibly do.

Ford is adamant about this point. He believes that as an elected representative, it's his duty to represent and that means responding to and communicating with the people who contact him. "I don't care whether it means that I and my staff have to make hundreds of phone calls a week for that, but I'm here to do a job for the people who elect me and they have the right to hear back from their representative to know it's being done."

I don't know whether that will work on the scale Ford hopes to engage, but the old-fashioned idea of a politician being unashamedly responsive to the public struck me as being a position worth supporting.

I would like to see Rob Ford file a civil action against the Star.
And once he becomes Mayor I hope he follows through with his promise to cut the number of councillors in half.

I will be voting for Rob Ford. I can't think of another elected official with the same degree of integrity.

Rather than discredit Ford, The Star is discrediting itself as a news source with these silly reports of alleged minor football coaching infractions from years ago. It really makes me wonder how desperate they are to see Ford defeated and what vested interest the Star might have in that.

Good report... thanks.
I have been writing about Rob Ford at my blog too and intend doing so at least once a week until he is sworn in as our Mayor.

to gain a better insight into this mayoral candidate, one must only need to read his wonderfully detailed personal blog , http://www.robfordmayor.com

"Ford is probably the least popular among Toronto's entrenched arts community, who are fearful of any reduction to the grants system which is, in effect, a welfare system for an established clique."

That's one heck of an unsupported statement to drop into the middle of things!

"The suggestion of the city using arts funding to buy art and therefore help all Toronto's artists who show merit and acquire equity for the city, rather than to fund artists, was one he found interesting."

The view that art is only valid when it can be commoditized and possessed is myopic and frankly horrible.

Much better in Toronto than it lots of other places. Municipal corrpution appears rampant in Surfside Florida look it over just Google "Who Controls Surfside?" (great blog) and visit www.savesurfside.com