The author of an anti-Semitic Ontario Institute for Studies in Education (OISE) thesis that claimed Holocaust education programs were part of a Zionist conspiracy to perpetuate Jewish victimhood has been exposed as a key individual behind the Toronto "Stop the Cuts" actions aimed at hampering Mayor Rob Ford's attempts to restore fiscal responsibility at City Hall.

Jenny Peto, whose Masters' Thesis for the discredited Sociology and Equity Studies in Education program at OISE alleged that the mainstream Jewish community "is dominated by racist...ideologies," was revealed by an anonymous reader of Eye on a Crazy Planet to be the registrant of http://www.torontostopthecuts.com/, the website that is the central information repository for the anti-Ford activists. Peto's thesis, titled,  "The Victimhood of the Powerful: White Jews, Zionism and the Racism of Hegemonic Holocaust Education" was condemned in Ontario's  Legislature by both the Minister for Citizenship and Opposition MPP's as being a "hateful and poorly researched...piece of garbage."

Understanding who is behind the radicals who want to prevent Ford from managing the city's fiscal crisis is instructive in unravelling some of their motives.

A number of vociferous anti-Israel and anti-Semitic organizations and individuals still harbour a grudge against Ford for his efforts to keep the group Queers Against Israeli Apartheid out of Toronto's Pride parade and his attempt to prevent anti-Semitic al Quds Day activities held by the Canadian Shia Muslim Organization (CASMO) from taking place on City property. 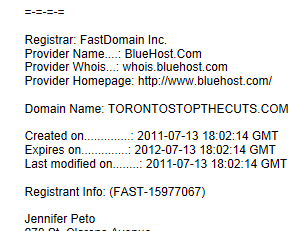 Until now the individuals organizing the anti-Ford actions remained mostly in the shadows, but the media contact number for Stop The Cuts is the same as that for the violent, union-financed activist group OCAP. One of OCAP's spokespeople is Liisa Schofield, whom anti-Semitic author Peto refers to in her thesis' acknowledgments as her "partner."

Regarding Ms. Peto's involvement in the anti-austerity campaign, Adrienne Batra, Rob Ford's Press Secretary, said on behalf of the Mayor's Office, "It's not surprising that someone who is clearly misinformed on so many issues would be participating in spreading this type of hysteria. The Ford administration is going through a thoughtful process on how to fix our City's finances, something that will, ironically, even help out those involved with this [torontostopthecuts.com] website."

There are lots more people like this posting on http://www.mediacoop.ca/

One of them is Geordie Dent who was on the executive of No One Is Illegal Vancouver who has now moved to Toronto. Here is a story about him and how he and others like him are funded by the city of Toronto.

For more than 10 years a tenant group - with strong ties to left-wing city bureaucrats - has seen its sole-source contract not only renewed, no questions asked, but its funding has more than quadrupled as well.

In 1999, when I first reported on the "purchase of service" contract given to the Federation of Metro Tenants' Association (FMTA), the group got $97,510 to run a hotline service.

This year, the group got $446,760 to operate the hotline, educate tenants and provide outreach.

The FMTA money comes out of the shelter, support and housing budget - the same people who brought us the $11.5-million Peter St. shelter boondoggle.

According to statistics provided by city spokesman Pat Anderson, the hotline responded to 7,566 calls and e-mails to Sept. 30.

All of this drives paralegal Harry Fine crazy for one simple reason.

Fine and others have also expressed concern with FMTA's secrecy and the radical left affiliations of several of its 10 full and part-time staff.

Geordie Dent, who writes on a website called MediaCoop (among others), has openly expressed anti-Israel sentiments and advocated for the G20 protesters in his blog.

Sarah Vance, listed as one of FMTA's hotline counsellors, was a former spokesman and employee of OCAP. Kelly Bentley, one of FMTA's outreach organizers, is also a former OCAP member.

When asked about the musings on his blog, Dent contended his writing is in no way "related" to FMTA.