The importance of checking who you're involved with on the net

Eye on a Crazy Planet recently did a published a piece on the Holocaust-denying, 9-11 conspiracy site Veterans Today. There was a link to Vet Jobs there that gave the impression that the Job link, HireVeterans.com was affiliated with Veterans Today.

Some of America's most prominent corporations pay to be "featured employers" on HireVeterans.com, which is directly linked to on Veterans Today. The two sites are both members of what is called The Veterans Today Network, which combined with the similarity in look between the sites gave the impression of a common business interest.

However I have been informed by the President of HireVeterans.com that such is not the case.

In fact, when he learned of the matter, the President of Success Spear LLC, which owns and operates HireVeterans.com, was appalled by the content on the Veterans Today site that links to his.

Veterans Today is one of the most repugnant, disgusting websites on the Internet. Its misleading name and the American flag on its banner head suggest its primary interest is in US military veteran's issues. But the website has board members like Lt General Hamid Gul, the former head of the Pakistani Intelligence Service, whose support for the Taliban resulted in the killing of many US servicemen in Afghanistan. The website is the public voice of insane 9-11 conspiracy theorists who claim that the US government was responsible for the terror attacks on the World Trade Center and Pentagon, Jew-haters, Holocaust deniers, bigots and others whose idea of political commentary suggests they have a serious mental illness.

Veterans Today describes notorious neo-Nazi Ernst Zundel as a "human rights activist" and a recent column denied the Holocaust happened but concluded with "If it does “happen again,” can I say that I just hope that they get it right the next time?"

( UPDATE: Nov 28/11 - It looks like the psychopaths at Veterans Today were a little sensitive about being identified as advocates for genocide, so they recently excised the line above from that article.)

HireVeterans.com is performing a laudable undertaking by supporting men and women who have made sacrifices and served their country. They should be commended for that but must be careful about their associations and links. This is something that is one of the ongoing hazards of Internet-based businesses and services.

HireVeterans.com is now making immediate inquiries to see to it that their good name is not tainted by association with the deplorable views of Veterans Today. 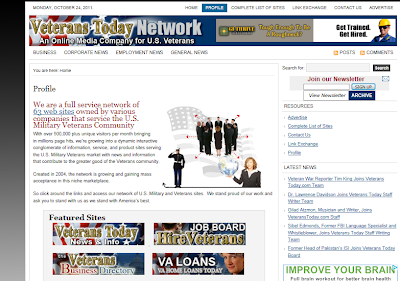