Sign the petition demanding that the city bill the St. James Park squatters for damages 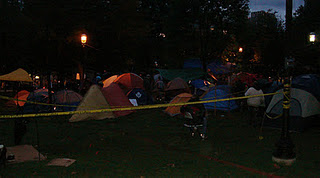 "Occupy Toronto" has taken over a park in downtown Toronto, necessitating extra policing costs, Their protests that have taken to the streets have caused major inconveniences for businesses and individuals. That combined with extensive damage to St. James Park that will need to be repaired will cost Toronto taxpayers hundreds of thousands of dollars.

Protest is an intrinsic democratic right, but the right to damage public property and disrupt the local economy in violation of civil laws is not. Occupy Toronto continues to engage in such acts with financial and material support from a variety of public service unions.

Occupy Toronto is comprised of attention-seeking individuals with an inflated sense of entitlement who feel that they have a right to have their desires paid out of other people's pockets. They have complained about cuts to civic services, yet are adding to municipal expenses which put greater pressure on available resources that may cause deprivation to people in genuine need.

Urban camping is not a basic civil right. Therefore we the undersigned demand that:

The Mayor and/or Chief of Police order police to issue fines to any individual violating city by-laws by camping in St. James Park as of November 1, 2011.

Sign the petition at this link
Posted by Richard K at 8:35 PM