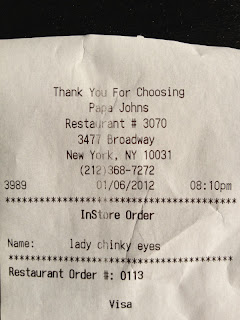 I've always maintained that racists are stupid, but just how stupid is always a new surprise.

A woman named Minhee Cho received a receipt this week from a Papa John's restaurant in New York in which she was identified by the name a server described her: "Lady Chinky Eyes"

Minhee Cho tweeted a photo of the receipt and as one might guess, there's a new position that just opened up to replace a recently terminated Papa John's employee in New York.

Ms Cho is the Communications Manager for ProPublica, an independent journalism site. Ironically she has demonstrated something people who work in media know all too well. Celebrity gossip and odd human interest stories get far more attention than hard news. With her tweet, Ms Cho has now generated more interest in herself than ProPublica ever managed to accumulate.
Posted by Richard K at 2:27 PM

That word between "lady" and "Eyes" is considered an offensive racist slur and was obviously intended as such in this context. It was originally used as a derogatory term against Chinese people, and is now used often by bigots who aren't able to differentiate between Asian people or cultures. The name Cho is traditionally Korean.