Communist fanatics at Canada's most biased, bigoted media outlet want a boycott of Sun News because of its baises.

This should work wonders.

The "strategy" a hysterical rabble.ca writer wants to employ is to have his fellow communists find a particular auto dealer to boycott it if it continues to advertise in Sun papers.

I never knew the halfwits at rabble.ca were so sensitive about profanity. It's not unpredictable. The perpetually aggrieved hatemongers who are the "official" media sponsors of Israeli Apartheid Week are always on the lookout for something to offend their delicate sensibilities and give their rasion  d'etre of being able to call themselves activists a jolt.

Here's a tip for the geniuses at rabble: their strategy only works if they bought cars from that dealer in the past. Boycotting someone you've never purchased from before in your life isn't really a boycott.

A car dealer may not be the best choice. Rabble.ca is almost completely funded by public service unions and the NDP-linked advocacy organizations The Council of Canadians and The Canadian Centre for Policy Alternatives. A hotbed of mindless radicalism published by NDP House Leader Libby Davies' spouse Kim Elliott, it could never survive on its own without those subsidies.

According to online ratings site Alexa.com, rabble's audience is primarily made up of women over the age of 65 who have some college education, but not degrees. 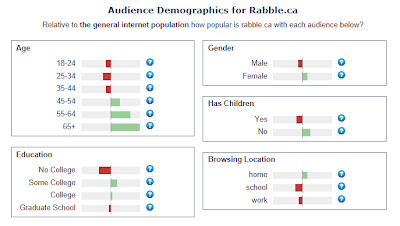 Rabble "readers" should try something a little more realistic. Do makers of support hose or organic health food stores advertise on Sun News?
Posted by Richard K at 4:16 PM

These demographic figures are proof enough that rabble.ca does not represent the future of this country. Thankfully, their calls for a boycott of Sun News will larger go unheeded.

Given that the Rabbleites run ILLEGAL (as per the Criminal Code) garbage like this...

...it may be time to kick things up a notch: do as I did and call the RCMP, as well as your MP. Running un-PC commentary is one thimg, but advocating violent revolution is a criminal offense. And tax moneys (via public sector union dues) shouldn't be funding an antisemitic, Hamas-supporting site like Rabble.