You can help name the Ship of Fools!

The halfwits who want to send a Canadian ship to be intercepted by the IDF on its way to Gaza want your help in naming their vessel.

Here's a link to the site where you can contribute your idea.

Make sure you pass your suggestions along!


UPDATE 6:10 pm - The Canada Boat Gaza website was so overwhelmed with responses that they stopped publishing (and removed) the results online.

Here's the list just a little while before it went down. (Click it twice and you'll be able to view all the names legibly) 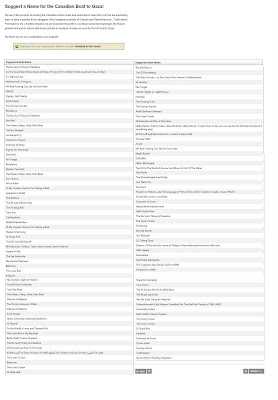 Thanks to Blazing Cat Fur for making the screen shot available so it can be viewed!


UPDATE 2: The humourless socialists and Islamists trying to raise funds for the Canadian Gaza boat have re-posted the list but have excised all the good names. Evidently they learned a lesson (likely amid a lot of cursing in the name of Allah, Richard Dawkins and Naomi Klein) and are now screening the suggestions before they publish them. But we still have the screen shot on the left that will live on as a reminder of the clever names they discarded. Whatever the totalitarian-minded fanatics use in the end, to me, their boat will always be The Sea Hitler.
Posted by Richard K at 2:39 PM

Thanks, Harry! I tried emailing you but they keep bouncing back.

UPDATE: Looks like they deleted all the ones we entered. Let's keep drilling them!!