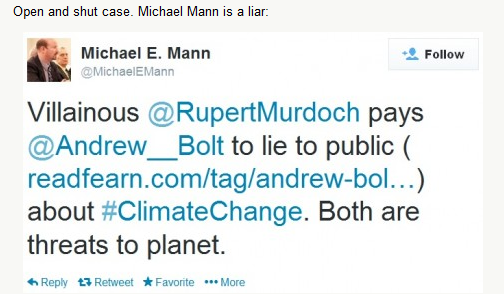 Andrew Bolt in The Herald Sun:


Normally I do not sue, but this seems to me a special case.
Mann, the climate alarmist who gave the world his dodgy ”hockey stick”, is now suing sceptic Mark Steyn for mocking him and his lawyers have produced deceptive legal documents in his defence.
Mann has published an outright lie that defames me, and should face the same punishment he wishes to mete out on Steyn for mere mockery.
I do not lie and Murdoch does not pay me to do so. Nor has Mann singled out a single “lie” I’m alleged to have committed.
In fact, Mann is so reckless with the facts that his tweet links to an obvious parody Twitter account run by one of my critics, clearly believing that it’s actually mine.

Related: Mann's puerile response to a recent editorial about climate change theory by Washington Post columnist Charles Krauthammer is to advocate swigging alcohol every time he encounters an idea in it he finds offensive. It's an interesting approach and indeed suggests prolific drinking may account for Mann's "science" and public behavior.

UPDATE: It has been pointed out to me that the original headline for this post incorrectly identified the Herald Sun as a Sydney newspaper, rather than the Melbourne Herald Sun, which is the actual location of the paper for which Andrew Bolt writes..

Mark Steyn ironically notes it's not worth suing over and while I agree, nonetheless I would like to offer my apologies. I have spent some time down under with Sydneyites and Melbournians and can attest that, at least back then, the former generally considered the latter to be uptight and humorless. (Although both were in agreement that New Zealanders are thoroughly uptight wankers.) So to anyone from Sydney, I do regret any offense that may have been caused by the confusion.
Posted by Richard K at 6:33 PM