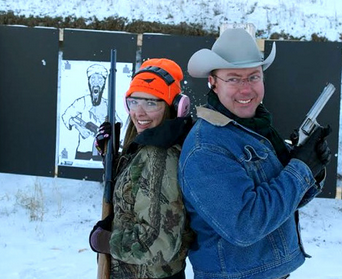 Souheil Merhi, the chairman of the Muslim Council of Calgary has accused Rob Anders of  "portraying Muslims as terrorists — “as people who should be shot or belittled" because the Calgary West MP used a shooting target that was a zombie depiction of deceased al Qaeda head Osama bin Laden.

The Muslim Council of Calgary is part of the Muslims of Calgary group which is holding an event on February 15 featuring a depraved, anti-Semitic conspiracy nutcase Muslim preacher named Yasir Qadhi who has proclaimed : "All of these Polish Jews which Hitler was supposedly trying to exterminate, that’s another point, by the way, Hitler never intended to mass-destroy the Jews. There are a number of books out on this written by Christians, you should read them. The Hoax of the Holocaust, I advise you to read this book and write this down, the Hoax of the Holocaust, a very good book..."

So this asshole is saying he used to be a moron, but now he's slightly less of a moron.

His argument is that before the days of google (which is also a lie, google was around and in wide use by 2001) it was ok to be a Holocaust denier.

Reads like a load of Taqiya, or for those unfamiliar with the term, lying sanctioned by Islam.

A load of crap - like most of these hatemongers, he was embarrassed that he was caught on camera.