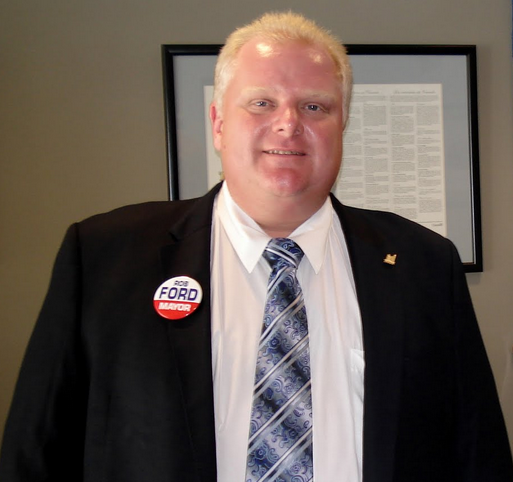 ...Here we come to the lasting political lesson of the mayor and his improbable survival: shamelessness. It is his greatest gift. Shame, or the fear of it, confines most politicians—most human beings—within certain boundaries of behavior. The mayor does not abide. His shamelessness allows him to say things like “I can assure people, hopefully it won’t happen again” with a straight face, but more important, it has allowed him to resist the unfathomable pressures that have been on him to quit. When public people disappear in the wake of scandal, it’s often because they can’t stand to have become the objects of our scorn, or worse, our ridicule. Their most basic self-preservation instincts drive them into hiding like dying cats, where they can lament their poor choices with a civilian’s private regret. The mayor’s not built like that. “I just block it out,” he says. “I know when I go outside at least half the people are going to support me, maybe more. I also know I’m going to get called names. I know that. Why even acknowledge it?” What makes Rob Ford limitless, the truest source of his power, is that he doesn’t fear your judgment. On the contrary, he’s at his mightiest when he’s being judged.

This time his enemies are real. They surround him. “I sincerely love my job and the people of this city,” the mayor says when he’s asked why he’s running again, but it seems as though he also wants to remain mayor just to prove that he can, that he alone can negotiate the traps he’s set for himself.

“We’ve had a couple of yahoos causing trouble for the last few years,” says a downtown councilor named Adam Vaughan, “but they’ve been dealt with.” That’s how a vanquisher talks, and Vaughan makes it sound as though the story of the mayor is over. But it’s at least a spring, a summer, and a fall from being over, and it’s potentially forever from being over.

“I don’t want to call it a street fight,” the mayor says today. “But I’ll never back down. If the people want me to leave, on October 27th, they’ll tell me to leave. But no councilors are going to tell me to leave. I know what I’m doing is right.”

Nobody knows what will happen next, of course.

"He was, as it turned out, proving himself a liar of considerable prowess, or at least a diviner of cheap semantics, a master parser of words and even syllables."

What makes Slim so friggin' entertaining is what a bad liar he is. Anyone interested on whether something is true or not need only look to the statements of Rob and Doug. 100% of the time, the truth is the opposite.

But his bald contempt for the intelligence of the public is fascinating.When most politicians lie, they do it in a way designed to make you feel like an equal to them, or better. Not the Fords. They honestly don't give a shit if you believe them, so long as 40% of the city is willing to.

"The mayor will run on his fiscal record—the city budget has, in fact, been slashed by hundreds of millions of dollars during his tenure."

That's demonstrably not true. The budget is in fact slightly larger than it was on David Miller's last day in office. And taxes are quite a bit higher.

Not being an idiot, I understand why one would want to run against Miller, who wasn't on the ballot in 2010 ad won't be this year, but it's still horseshit. It's telling that Hizzoner has only one opponent on the left and several on the right.

On the other hand, I'm tempted to vote for him. He's such an irredeemable fuck-up that he'll see his victory as a validation of his being a crack-smoking shithead. He''ll start doing PCP for breakfast and slaughtering whores for breakfast, and that'll be fun to watch, assuming that he isn't charged before October.

The bureaucracy can run the city like it always does and Ford can provide the freakshow that I've come to adore.

Well, Skippy, if you vote and you don't vote for Ford, you'll have to pick someone else and those picking will be slim, even if some of the anticipated candidates choose to run (and I don't think the 2 most likely prospects will).

You're right about the budget and taxes going up slightly under Ford. But if you compare rates of growth of the civil service and taxes under both Ford and Miller, it's hard not to conclude we're better off now.

Assuming that I vote with my head and not my funnybone, I'd be fine with John Tory, Denzil Minnan-Wong or Karen Stintz, in that order. Or I might do what i did in 2000 and vote for a transvestite, who was still less embarrassing than Mel Lastman.

And I'll remind you again that Miller wasn't on the ballot in 2010, nor was anyone other than Joey Pants running on his record, so you're again presenting a false choice.

I was comparing what was to what is, Skippy. Do you intentionally miss these points?

I doubt Tory will enter the race and Stintz and Minnan-Wong are showing themselves to be pretty flaky. I know that might sound like a blunt dart when considering the behaviour of the current mayor, but Ford is a known quantity with a known, and consistent political agenda. Equivocators like Minnan-Wong and Stintz are not people I trust much in their role as public officials.

Comparing what is to what was may or might be plausible in a party-controlled system of government. That's not as true under the non-partisan Council as dictated by the Municipalities Act.

And since the anarchy of the Ford mayoralty is pretty much what I predicted three years ago, allow me to point something else out.

The city is looking at about a $400 million budget shortfall next year. Not only can you not get Hizzoner to address that, he can't pass a mere $60 million in imaginary "savings" and is promising zillions of new spending for in subways, keeping the fucking Gardiner up and tax cuts that will never happen.

Your boy's most entertaining lies aren't about what a drunken, crack-addled fuckhead he is, they're about his policies.

And keep in mind, the main event in this race isn't Ford against the "socialists," it's Ford against innumerable other conservatives, the survivor of which faces Chow.

In any event, if I were involved in Slim's campaign, i'd stay as far the fuck away from the word "trust" as I possibly could. That opens you up to really nasty attacks.