Hillary Clinton is the Trevor Noah to Obama's Jon Stewart 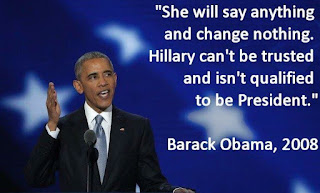 When Donald Trump became a candidate for the Republican presidential nomination, not all, but most people thought his candidacy was a publicity stunt and that he would probably drop out within a couple of months.

Obviously, most people were wrong.

Trump is a bombastic egotist and was one of the least qualified of the Republican contenders.

That didn't matter. He was able to cleverly tap into enough discontent with the establishment to become the Republican presidential nominee.

Last night, I put on The Daily Show in the background while I was doing other things, half paying attention to it. I haven't watched more than a consecutive minute or two of that program in months. It had grown tedious and unfunny for years since Jon Stewart finally stepped away from hosting it. His replacement, Trevor Noah, is even less funny than Stewart at his lowest ebb. Perpetual crankiness and snark may be the norm for college undergraduate millennials, but it gets boring fast when coming from the host of something that purports to be a comedy show. It's no surprise that the show's ratings have been taking a nose dive.

Why am I bringing up The Daily Show? Because for the dozen minutes or so I had it on last night, every single second was devoted to bashing Trump and try to imply all his supporters are idiots. Noah and an allegedly comedic faux 'correspondent' smirked at their own lame efforts at humor, falling completely flat while apparently convinced of their own cleverness. Even the laugh track seemed to have a hard time sounding enthused about them.

It was smug, and condescending towards at least half the potential viewing public. While offering nothing particularly clever or original, it assumed agreement on the part of its audience while trying to coast on its brand rather than trying to earn an audience through merit. The new Daily Show is the perfect metaphor for Hillary Clinton's campaign.

Donald Trump is the least qualified and probably the worst-informed presidential candidate a major party has ever offered. And he's still going to beat Hillary.

In Clinton, the Democrats have chosen a tiresome and tired-sounding hack who embodies the least appealing characteristics of everything that big politics represents. She's the Trevor Noah to Obama's Jon Stewart. Just as the public was growing jaded with Stewart prior to his exit, and he was replaced with someone even less talented, so the Democratic party is replacing a President with whom many Americans grew to cynical with Mrs Clinton, whom they find thoroughly distasteful.

In this election more than any other, voters will be going to the polls not to mark a ballot for the candidate they want to see as president, but to cast a vote to prevent someone they find to be deplorable from sitting behind the desk in the Oval Office. However in this, there is also a big difference.

Far fewer than half of those who indicated they support Hillary Clinton have said they are very enthusiastic about casting a vote for her. But on Donald Trump's side well more than half of his supporters are keen to vote for him. Trump has more than a double digit lead in that aspect of voter support. Just as Trevor Noah's incarnation of The Daily Show has written off Trump supporters, Clinton's conceit has made it almost impossible to grow her base by gaining potential coverts, alienating them as "deplorables" and "irredeemable." So which side is more likely to turn out in greater numbers on November 8?

The answer to that could very easily translate into a Trump presidency.
Posted by Richard K at 12:08 PM

barry hussein obama is the least qualified person to have ever run for any office. Trump is vastly qualified compared to the traitors obama or shrill