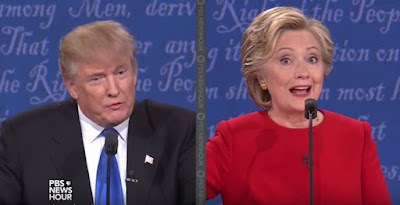 A surreal moment from last night's Presidential debate was the point when Hillary Clinton started giving a lecture about how she would improve America's cyber security. The same Hillary Clinton whose cavalier mishandling of classified information would have landed anyone who isn't named Clinton in jail. It was like getting a lesson in how to slim down and look sexy from Lena Dunham.

The bar was unusually low for both candidates' path to success, but for Trump, it was a hurdle that a Chihuahua could leap. All the real estate developer needed to do was to demonstrate that he wasn't insane and could behave reasonably. To accomplish that, he showed uncharacteristic restraint, disappointing the expectations of those who wanted fireworks, but for the most part, it was pulled off successfully.

Hillary's bar was something most people could manage, but for her, is something she's never been able to surmount for the last quarter-century of her public life. She had to convince people she is likable and not a pathological lair. Her smug smile and reminders about her email scandal, and her testimony to Congress after her lies about the Bengazi massacre, did nothing to convince anyone that the Hillary Clinton Americans saw last night isn't the same Hillary Clinton they've seen since Bill Clinton first ran for the presidency.

Everything Hillary said had a subliminal boomerang effect that made it come back and hurt her if anyone bothered to think about it. She criticized Trump for, while as a private citizen, expressing equivocal support for the Iraq War that she voted in favor of when she was a serving US Senator. She criticized Trump's insults of women while she was an enabler to a husband who is subject to rape accusations that are beginning to rival in numbers those of Bill Cosby.  Anyone who watched the Republican primary debates and heard what he said about his male rivals knows that Trump can at least lay claim to being an equal opportunity insulter.

With regard to insults, though Trump has a reputation as being rude and bombastic, it was Clinton who threw vicious insults at Trump, calling him a racist and sexist. Clinton claimed that Trump's 'birther' questioning of President Obama's birthplace was racist. That only makes Clinton look more dishonest, unless she's suggesting that Trump's almost identical challenge of his Republican primary rival Ted Cruz means he's racist against Canadians. And as Trump reminded viewers, it was Hillary Clinton's campaign that started much of the 'birther' controversy by sending out a picture of Obama in traditional Muslim garb and questioning his 'American roots' during the 2008 Democratic primaries.

Clinton, on the other hand, will pander to every special interest laying claim to victimhood. Or she will during the election campaign. Once it's over, were she to win, she'd forget them the same way that Democrats have forgotten dilapidated Chicago neighborhoods they represent that are beset with gun violence despite being subject to some of the strictest gun control laws in the US.

Trump made some missteps during the debate, such as when he took the bait to respond in excessive detail when Clinton suggested his net worth was less than he claimed. But on the whole Trump was the more human, the more genuine, and the more commanding of the two.

However this was the first of three debates, and that bodes badly for Hillary Clinton. In twenty five years of public life, she has shown little in the way of a learning curve. Trump's ability to change through the Republican primaries, the presidential campaign, and now the first debate shows that he has a strong ability to adapt when necessary.  Trump is also a showman, and in show business, you know that you need to open well, but what's most important is to end the act with a strong closing scene.

With two debates to come, Trump is more likely than Clinton to provide the big debate finish that will end the political career of his opponent.
Posted by Richard K at 11:04 AM

Just like you were the only person in Toronto who believed Rob Ford didn't do crack, you are about the only person on the continent who thinks Trump didn't lose the debate. Even Trump thinks he lost which is why he's been spinning out of control all week long.

Trump was pretty much acknowledged to have won the 1st half hour of the debate, the point where most people start tuning out.

As far as our late, beloved Mayor Ford is concerned, you're comment is pretty funny, if idiotic. I never said I didn't believe he didn't do crack. I said there was no proof until there was irrefutable proof or an admission. I also said I don't care if he did crack, because Ford on crack was still better than Kristyn Wong Tam, Shelly Carroll and Gord Perks and about three quarters of the rest of City Council combined sober.

You sound like a weird Portuguese tarot card reader who can't sort out facts and has developed an obsession with me.

"Now Gawker is saying Ford crack video may be "gone". Or maybe it just didn't exist in the first place?" With brilliant analysis like that no wonder only a handful of people read your blog and no wonder you'd think anyone who has commented on your blog exactly twice in the past 5 years is "obsessive". It must shock you that anyone who has stumbled across your vain idiocy once would ever both checking in again.

Go look up the word "maybe."

And yes, it does shock me that someone who thinks I'm a vain idiot would check in and scour my blog so often. I guess vain idiots must turn you on in some strange way. Well, in the age of the Internet, everyone can now fulfill their own fetish, I suppose. And you're talking about the just comments I published from you, not the ones I didn't. Normally I delete anonymous comments unless I think they're funny, like these.