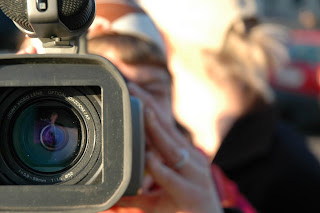 David Katz, the young journalist who filmed the impromptu interview with Libby Davies responded on his blog to Dobkin's attack.

David mentions that he wasn't doing it as some covert "pro-Israeli" act and there is nothing to suggest he is being anything but completely honest.

I saw the video on June 9 and sent it to a number of CanWest reporters (and posted a link to it in a few select locations online), pointing out how Davies' reference to Israeli "occupation" beginning in 1948 in effect is a denial of Israel's legitimacy. She was clearly asked whether she thought it began in 67 or 48 and she said "48." I also pointed out that it was significant that she, the Deputy Leader of the NDP, expressed support for a Boycott, Divestment and Sanctions campaign against Israel.

I received almost immediate responses from two CanWest reporters and two days later, an editorial titled "Haters' Test" appeared in the CanWest paper, The Ottawa Citizen, condemning Davies for her positions stated in the video. Davies responded with a dubious "apology" on her website after that editorial appeared and then the story broke as a national news item, led by CanWest, on the following Tuesday, June 15.

Between this matter and the Kevin Neish expose I was working on (which was the basis for Micheal Ross' June 15 article in The National Post), a friend suggested I start a blog, so Eye on a Crazy Planet came into being late Sunday night, June 13, 2010 (with the first post up just after midnight on Monday morning) with the Davies piece as its first post.

I should note, only the editors and reporters at CanWest know whether it was the information I provided that led to their covering the Davies video, or whether they also received the information independently of me, but the ones I corresponded with hadn't seen it before I sent it.

Sorry if I helped get you more attention than you wanted, David, but you definitely got a kick-start to your career in journalism.

Dont worry about it
nothing quite like trial by fire
David

David has handled all of this with intelligence, and a grace and decorum that would put many far more experienced journalists to shame.

I anticiapte a long and successful future for him in whatever he pursues.