Does The Toronto Star have a vested interest in defeating Rob Ford? Take a look - One of al-Starzeera's ads turned up on this site (click image to enlarge): 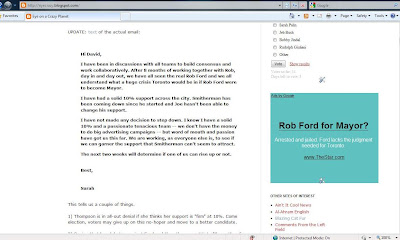 The link on the ad went right to http://www.thestar.com/
UPDATE: I called The Star's Advertising Department and they said they did not take out this ad. However this raises the question, who then would be able to take out an ad placed through Google's ad servers that had The Star's name and a link back to its site on it if not them? These ads are no longer appearing in my ad cycle. All very strange and suspicious.
UPDATE 2: This is very fishy, as is the fact the ads appeared briefly, for one cycle, then vanished.
IF the Star's not behind it, then the logical conclusion would be that it's someone who opposes Ford and whose message/position is being promoted by the Star. I wonder who that could be? That doesn't sound like Pantalone or Thompson..
I tried calling Google offices in Toronto to get to the bottom of this. Believe it or not, Google Canada offers no form of live support, the contact phone number is basically an answering service. The person I spoke with gave me the number of Google's head office in California, which I'll call after 12 pm (9 am Pacific time) but she told me not to get my hopes up about speaking with a live person there either.
UPDATE 3: called Google in California - no live support but posted a question in their help forum
UPDATE 4: The Rob Ford Star ad has reappeared on Sassywire at 12:25 pm!
Here's a screenshot: 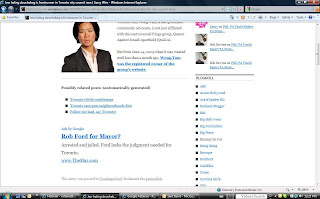 The link goes to this al-Starzeera story: http://www.thestar.com/news/gta/article/849744--go-ahead-take-me-to-jail-ford-told-police
UPDATE 5: I just called The Star and was put through, in his roll dealing with Community Relations, to Bob Hepburn's voice mail. I left a message asking him to comment and clarify about this. Yes, the same Bob Hepburn who wrote the column yesterday saying Rossi, Pantalone and Thompson should drop from the race to help Smitherman. I await his reply..
UPDATE 6: Still no word from Bob Hepburn (surprise, surprise) 3 hours later. But I have noticed the anti-Ford Star ad reappear here on Eye on a Crazy Planet quite a bit. I'd suggest you click it if you see it, and you'll see where it takes you (plus it'll cost the advertiser some money!)
and...UPDATE 7: Google won’t help in identifying the advertiser. The fact it had the Star’s name on it and a link back to them evidently doesn’t establish who placed the ads. The logical assumption is that a rival campaign is behind them, but by having the Star listed prominently on the ad and suggesting the ad is from the Star, something underhanded appears to be going on.

Here’s a link to my attempts to solve this through Google:

So we may never get to the bottom of this. Whether it was one of the rival campaigns, The Star, or someone else who placed the ads, remains a mystery for now.
Posted by Richard K at 10:05 AM

Better go get rubber boots, when all the socialists head's explode when Ford becomes mayor the blood will be running in the streets!

I don't believe a word the Star says.

How did the Star react to a certain petition, did it agree it was legit or had been hacked.
So if they didn't do this, are they saying they can be hacked, but not petitions.

This isn't a hack. This is someone buying search terms from Google ads. If Toyota wants to buy the search terms "new car" and "toyota", they can. Someone bought a "Rob Ford" related adword term. Probably Smitherman, or maybe someone who likes the guy. Redirect to an uncomplimentary article. Ta da.

This is definitely not a hack. But on the other hand, there is something very suspect about someone buying ads that make it appear they are from The Toronto Star if indeed they are not.

It can be very damaging to an individual or organization's reputation if that is done and this makes it look like the Star is launching attack ads against Ford.

If I were The Star, I would make a public denial and try to get to the bottom of it. Google also has a responsibility to ensure that their advertisers are not misrepresenting themselves to appear to be or represent someone other than the ones actually authorizing the ads.

If indeed the Star isn't behind all this..

Oh yes they will.

i m voting for Ford

hahaha joke's on Ford! He deserves everything he gets.