That's how the US educational system has been described by American education reformer Geoffrey Canada in a discussion following the new documentary Waiting for Superman.

David Guggenheim and Participant Media, the director and production company responsible for An Inconvenient Truth, will be releasing a movie next month about how America's schools are robbing a generation of children of the opportunity to receive an education that enables them to compete in the global marketplace.

The public school system in the US was the zenith of world education two generations ago, but has fallen to one of the lowest standards in the post-industrial world. Virtually no state in the union has better than 40% of its students who have achieved grade-level reading and math skills. In the District of Columbia, it's a dismal 12%.

There are a variety of reasons for the failure but one of the culprits that Waiting for Superman focuses on is the Teachers Union. 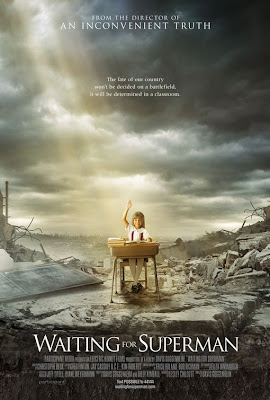 The tenure system in US public schools virtually guarantees that teachers cannot be fired. No matter how incompetent or uninterested a teacher may be in their job, they can't be removed, and class after class, year after year, students will receive an inferior education from that teacher.

Waiting for Superman follows 5 families who are trying to get their children into charter schools, which use public money, but don't have to follow the rules and formulas proscribed by the Public School system. Geoffrey Canada, who is featured in the documentary, has started up many of these charter schools that ensure high standards of teaching and provide students with structure and discipline. The results of Geoffrey Canada's teaching methods have been spectacular.


Geoffrey Canada has spoken on 60 Minutes about how as a child he cried when he learned Superman wasn't real. His sorrow was because of the lost hope in a superhero who could arrive and ensure that justice is done.

America's wait for a Superman to save the public education system may be a long one, but at least reformers like Geoffrey Canada, though without a cape, are out there saving one school at a time.
Posted by Richard K at 11:50 AM