I like Carolyn Bennett and a friend of mine is one of her assistants.

I don't agree with her about everything. For example, we have different opinions on the Iraq war. Mine are more like Christopher Hitchens' and hers are like Michael Ignatieff's are now (as opposed to Michael Ignatieff's before he decided he wanted to be Prime Minister, when he too agreed with Hitchens).

But Carolyn is a good MP, a devoted public servant, is accessible and we share enough views that I am comfortable in supporting her.

Today, she tweeted an article from rabble.ca about Stephen Harper's appearance at the UN. Followers of this blog know my opinion about rabble.ca, which I usually refer to as being a Marxist mouthpiece and a collection of some of the least intelligent minds in this country who lend their support to a number of particularly odious causes. 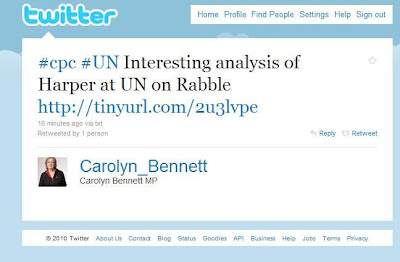 Usually when a public figure tweets something with a description of it being "interesting," it can conceivably be taken as some sort of endorsement. The article by Derrick O'Keefe, contained rabble's typically simple-minded, extreme bias against Israel:

Canada under Stephen Harper has been called “Israel’s best friend,” even as that state has grown ever more aggressive in violating international law to maintain its occupation and collective punishment against the Palestinian people. Fittingly, Israeli PM Netanyahu was visiting Ottawa in May when Israeli forces massacred nine members of an international aid flotilla seeking to break the siege of Gaza. The Harper government took the lead in enforcing the siege, backed Israel’s brutal military assault on Gaza, and has taken steps towards criminalizing and suppressing criticism of the state of Israel. .. -War. But then Harper’s unstinting support for Israel is consistent with his sympathy for war and illegal occupation more generally -

Needless to say, I was very surprised. Carolyn has always been a strong supporter of Israel, but people have been known to change their positions (see Michael Ignatieff above).  I tweeted this back to Carolyn: 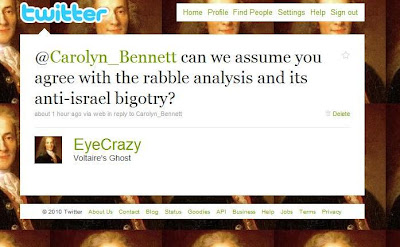 I hoped the answer would be "no" and was gratified to see I was correct in her subsequent tweet: 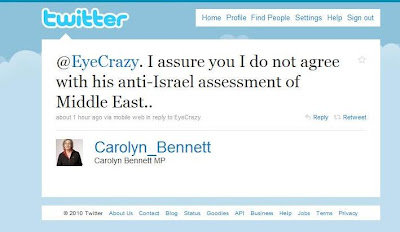 I thought this was an informative lesson on the dangers of politicians using social media without being fully aware of its implications and through my friend, contacted Carolyn to get her version of events.

Of course, Carolyn remains a strong supporter of Israel and her mistake was in not reading the article carefully and not being familiar enough with its dubious source or author. Another part, naturally is that partisanship tends to make politicians jump a little too easily at opportunities to attack the other side, and the people who hate Stephen Harper in this country have not done themselves any favours by acting rashly and aligning themselves with some nefarious characters.

Carolyn asked what I would suggest she do under the circumstances to clarify matters and make sure that no one misconstrues what happened. I suggested two things. The first is to get ahead of the game and make a statement herself telling the truth about what happened. Everyone makes mistakes. And she hadn't done anything wrong. It would only be a problem if it were misinterpreted.

But it's best to talk about it yourself than to wait for someone else to come across it and do just that.

Carolyn took my advice and promptly posted this to her blog:


A friend sent me a link to a Rabble.ca article on Stephen Harper’s speech at the UN. I didn’t agree with the premise that Canada didn’t deserve a seat on the Security Council, but I thought the the record on indigenous people, global warming, Aid, Khadr was worth sharing .. I retweeted with the word ‘interesting’ … I was shocked to be tweeted back asking if I supported the anti-israel rhetoric in the article. I went back to the article and was upset to realize that the article I bhad read on my berry had truncated and that I hadn’t read the last paragraphs before I retweeted the article. This is a serious lesson for me. I am thankful how quickly the error was pointed out to me and that I was able to reply that in no way did I support the anti-Israel message. As I hadn’t really agreed with the premise of the article I had used the word ‘interesting’ on purpose. But I now realize that as an MP if I cite an article it can be interpreted as ‘promoting’ it or worse yet that I agree with every word. In the future I promise to be more careful and to make clearer my support or lack of support for the opinions being put forth in the ‘link’. Mea culpa. It has also been pointed out to me that I should be wary of certain publications, authors as an initial screen. I will do better in the future. I learn a great deal using social media tools… The information, the frank feedback are all part of a learning culture and a ‘democracy between elections’ in which citizens and their elected representatives can interact in real time. I take this responsibility seriously. I apologize for today’s error.


Her post has already been picked up on Canada.com

All's well that ends well.. just another day in the blogosphere...

UPDATE: Looney Tune al-Starzeera columnist Antonia Zerbisias, whose pathological hatred of Israel led her to write defenses of Hamas in The Toronto Star's Living section until she was canned from that gig, is shocked and saddened that Bennett would apologize for inadvertently tweeting the anti-Israel rabble.ca tripe (which the Zerb no doubt endorses in all regards). 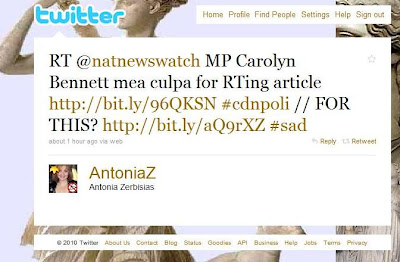 You can't get much better confirmation than that. When the Zerb doesn't like something, it's almost certainly the right thing to do.

UPDATE 2: Less-than-brilliant blogger Dr. Dawg saw Carolyn's clarification and attributes it to the evil Israel lobby and a big conspiracy! Wow, I didn't know a tweet from me was so important. According to paranoid nitwit Dawg, I am "the spinning blades of the pro-Israel lobby."


Thanks Dawg, now I really feel powerful! I left him a comment in gratitude.


it may not have occurred to you, Dawg, but Carolyn has been a consistently strong supporter of Israel, and upon confirming the full text of the article, she wanted to make it clear that she didn't want to be associated with the idiotic views expressed about it.

Quite commendable, really, on her part.

Your position is clear, you want to label Israel as an "apartheid" country, although you really should invest in a dictionary before you continue with that. Apartheid doesn't usually allow for racial integration and full enfranchisement, but what's a few facts here or there?

You might want to look into the Palestinian law that proscribes the death penalty for anyone selling land to Jews and see where that fits into your apartheid concepts, or can we assume that's just fine with you?


Imagine.. a parliamentarian wants to make sure that her position on an issue isn't misconstrued, and since you don't like that position, it must be part of some conspiracy. Suffering from a little LDS yourself, it seems.


And by the way, I'm the one who alerted Carolyn to the full content of the article. We had a nice conversation in which I suggested to her that rabble is not the sort of publication that lends itself to credibility. I make the sacrifice of wading into that ideological cesspool from time to time to see what the other side is up to, but rabble.ca articles probably shouldn't be referred on other than for the purposes of being mocked.

Dawg provided a perfect example of the paranoid delusions and conspiracy-minded craziness of the extremists on the anti-Israel radical left. One tweet from me and  "the spinning blades of the pro-Israel lobby" are at work. And a clarification by Carolyn of her policy position to preclude misinterpretation becomes "self-abasing confessions offered by the victims at Stalin's show trials"

Wow. And people like Dawg and Zerb wonder why the rest of us think they're nuts.

And by the way, Dawg demonstrated his commitment to free speech and liberalism by banning me from his site after that one and only comment I ever posted on it. Ha!
Posted by Richard K at 8:14 PM