Trouble getting the right message out: George Smitherman says that in a perfect world, Rob Ford "would stop new immigrants from coming to the city"

But I don't think it's what he meant.  It's not hard to see why Smitherman is having trouble communicating his  "leadership" message effectively!

Of course it must be difficult for Smitherman to totally misrepresent what Ford said, as he does in the statement below, while remaining coherent. Evidently the challenge was too much for Team Smitherman to overcome.

Here's the statement from the Smitherman campaign:

At Tuesday night’s CP24 Debate, Rob Ford was questioned several times: What would Toronto’s motto be if he were mayor? His answer – 'Open for Business.'

Rob Ford’s words and actions at last night’s debate were a strong reminder of his stance on immigration – in a perfect world, he would stop new immigrants from coming to the city.

This is a glimpse of how City Hall will treat new and landed immigrants if Rob Ford becomes mayor.

Torontonians have less than 5 weeks to decide what kind of city they want. I believe in a diverse Toronto that builds on our strengths, not divides - that if we join together, our best days are ahead. These are our values. I love Toronto and that is the city I'm fighting for." 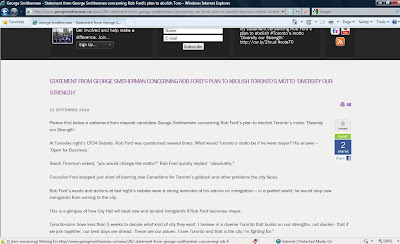 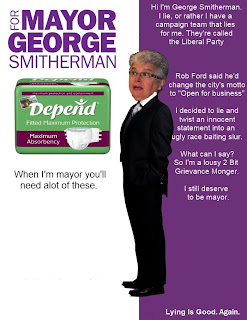 George Smitherman's campaign sounds like the racist and fascist propaganda peddled by the bigots in Bob Rae's government. Come on Georgie Boy, after $1 billion was squandered in the e-health debacle, pontificating and grandstanding on any topic by yourself smacks of hypocrisy. The people of Toronto will never choose a race monger for mayor. Bye bye Georgie Boy.