God save the Jews from Bernie Farber 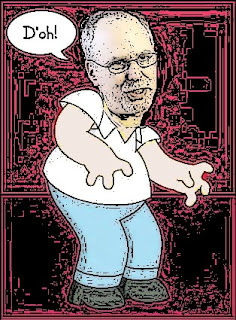 It's not that Bernie Farber doesn't mean well.

It's not that he isn't a supporter of Israel.

It's just the guy is so clueless, and so narcissistically intent on trying to look like a 'human rights' champion, that he'll get in bed with all sorts these days.

But give Bernie a break.

He used to be the big Jew on campus. Then, he got the shove when the Official Jewish organization he headed, the Canadian Jewish Congress, was dissolved and most of its advocacy functions absorbed into the new Centre for Israel and Jewish Affairs. Right after that, the voters of Thornhill resoundingly rejected him when he ran as a Liberal for the Provincial legislature in that heavily Jewish riding.

So with the professional Jewish thing not working out so well, Bernie had to turn to greener pastures. Hey, a guy's gotta eat!

These days, Bernie is pushing the fake narrative of a "genocide" against Canada's First Nations and sucking up to the likes of she of the phony-hunger strike, the corrupt Indian Chief Theresa Spence.

But having been turfed out of the Canadian Jewish Congress gig evidently taught Bernie not to put all his eggs in one basket, so he has been busying himself with still other grievances to monger. Those being on behalf of the Gypsy* community.

In so doing, Bernie is getting mixed up with the kind of people that begs the question, "just what is wrong with that doofus?"

Bernie's latest showcase to advertise what a hell of a guy Bernie is has him on a panel discussing the documentary Never Come Back alongside the film's director, Karl Nerenberg. Human Rights hero Bernie and Nerenberg will discuss the purported  plight of Canada's Gypsy refugee claimants.

And just who is Bernie's new pal Karl Nerenberg?

He's the Ottawa correspondent for the fanatically anti-Israel website rabble.ca.

The same rabble.ca which has billed itself the "official media sponsor" of both the anti-Semitic hate fest Israeli Apartheid Week and the not-so-Jew-friendly Sea Hitler Gaza Boat.

Rather than their self-serving pontificating about refugee law reform, it would be far more interesting if the Q&A were to field some questions about the implicit Jew-hate of the outlet for which Nerenberg works. It would be enlightening to hear him explain why he takes a consistently disparaging and cynical tone towards the Jewish state whenever he writes about it for rabble. Or perhaps he might elucidate about exactly what he meant when he wrote, "The Conservatives focused on Mount Royal as part of their "Jewish strategy," a strategy that won them a number of seats in Toronto.  " and  "the Conservatives have managed to attract Jewish votes with a policy that is -- to a fault -- blindly uncritical of Israel and everything its government does. "

Bernie and Temple Emamu-El's embrace of Karl Nerenberg should make for an evening to anticipate, and I
anticipate the best description of it would be: nauseating.


*Despite what a handful of self-promoting revisionists in the Gypsy community and their politically correct pals may lead you to believe, the Gypsies are a diverse community and not all of them identify as Roma. There are many who are proud to remain and be called Gypsies.

I think you should retract your blatantly false statement, "looking pretty goofy these days"

Bernie has always looked pretty goofy! It is not a recent development.

That first comment is lookist - I denounce it as a thought crime!