Obama's best solution for Syria: Blast the living shit out of Hezbollah and Iran's Revolutionary Guards

Who would have thought that a wretched, backwards little country about which few in the west ever think, let alone care about, could trigger one of the world's great conflagrations?

There are no good guys in Syria's civil war. We are at the deplorable point in world affairs that the despotic Russian President Putin has more credibility than US Secretary of State Kerry, when the latter has said "moderates" are in charge of Syria's rebellion and the former called him a liar.

A world war is not going to break out if the US bombs Syria to punish it for using chemical weapons against rebels. But it's worth remembering that just under 100 years ago, the assassination of an Austrian archduke in Serbia triggered a war which was responsible for history's greatest loss of life of soldiers in battle. The point being, these things have a way of getting out of hand when national leaders don't know what they are doing.

Barack Obama is not a President whose leadership inspires great confidence on the world stage. It is for that very reason that he does need to keep his word and launch a punitive strike in Syria. Not to teach Bashar al-Assad a lesson, but to keep the world from spiraling into the even more chaotic state of instability that would worsen if miscreant nations realized that American threats carry no weight.

Because of Obama's dithering and then mishandling of the Syrian file, he now has to strike. 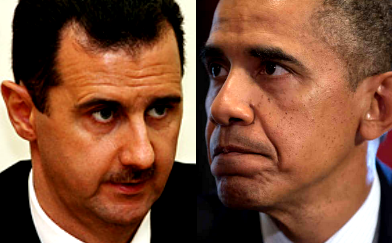 The west has nothing to gain and much to lose if the scales are tipped too far in either direction in Syria. However one of the reasons Syria is a linchpin in its region is its close relationship with Iran and its influence in Lebanon with the Iranian-proxy terror group Hezbollah.

Both Iran and Hezbollah have sent fighters to support Assad in the civil war.

It is they whom the US should strike, and it should be done decisively.

Syrians would not be infuriated at the deaths of foreigners that insinuated themselves into their domestic affairs. Assad would not be toppled by the loss of the Iranians and Hezbollah auxiliaries. But a clear message would be sent, both to the reprobate Mullahs in Tehran, who have terrorized the Middle East since the Khomeini revolution in 1979, and to their subordinate stooges who maintain a stranglehold over domestic affairs in Lebanon through thuggery and intimidation.

Obama could accomplish a great deal if he has the resolve to push through the measure. It would restore him as a world leader, help stave off the collapse of American credibility, and even give the US President an opportunity to provide a "teachable moment" to the world's most vile rogues.

There are a few problems with your proposal.

Firstly, a strike that doesn't topple Assad doesn't accomplish much other than send the message that you can use WMD and survive in power.

The problem is that toppling Assad - with would likely take a couple hundred thousand troops on the ground - is worse than having him in power.

Second, no one has suggested that the Revolutionary Guards or Hezbollah knew about or condoned the sarin attack. Hitting them confuses the justification for any intervention.

Third, I don't know how you wipe out the Guards and Hezbollah in Syria without taking a significant portion of the Syrian regular army and tip the scales to the rebels.

Fourth, any such attack practically invites terrorist responses in Israel, Turkey and very probably the US homeland.

Fifth, Tehran would probably shut down the Straits of Hormuz, causing skyrocketing oil prices that could send a delicate economy straight back into recession.

Sixth, the major lesson of Reagan's adventure in Lebanon is that once you intervene in a civil war, you own it, along with the attendant consequences.

Why Obama would do that with almost no domestic and congressional support baffles me. He must know what happened to LBJ and Nixon in Vietnam under similar political conditions.

Seventh, and maybe most importantly, no one seems to know how the Russians and Chinese would respond to a attack like that.

In the last twenty years, Moscow has seem NATO expand right to its western and southern borders and the US topple several of their client states. At what point to they decide that enough is enough?

I haven't seen anyone address any of those points, and they really should.

Nor could the Iranians really compalin about advisors who aren't really there. But they might get the picture.

Skippy, there is no such thing as a good plan in this quagmire so it boils down to a question of whether America does something or nothing. The problem is that Obama has committed himself and doing nothing destroys US credibility, which is the worst thing that could happen. And to your first point, doing nothing also sends the message that you can use WMD and survive in power, which is something we knew anyway from when Saddam used chemical weapons in the Iran/Iraq war.

I think a lot of your other points are not taking into consideration that Iran is extremely unlikely to do something that would almost certainly provoke war with the US, which is what would happen if they tried to close the Straits of Hormuz.

As to the IRGC and the Hezbos, you know that very few of the Syrian Army had personal culpability for the chemical weapon use either. The reason they would take the hit is because they are fighting on Assad's side. However striking The Iranians and Hezbos, which are both terrorist organizations and are both in Syria fighting the rebels for Assad, is a totally legitimate response that would achieve about as productive an outcome as one could hope for in this mess.

Skippy, Syria at the moment is a target rich environment. Revolutionary Guards, Hezbollah...but, as I suggest at my place, no reason at all to be uneven. Hitting Chechean elements, al Quada participants, Muslim Brotherhodd fanatics would all be good. Keep the sides even.