Toronto District School Board starts school year off with a bang: One of its schools endorses Holocaust-denying, 9/11 conspiracy website and calls PM Harper a "fascist"

The Toronto District School Board's "Student School` is a bizarre melange of lunatic, pro-Communist insanity that eats up tax dollars.

Does that sound a bit reactionary and hyperbolic?

It would, until one looks at the material the school has posted lauding the Communist serial-killer Che Guevara and decrying capitalism.

But it gets worse.

Throughout the Toronto District School Board, seminars are regularly conducted for students and parents teaching them about the perils of social media.

Ironically, the TDSB is the last source one should look to for instruction in that area.

The school has a facebook page, maintained by "The Student School" itself and just before the school years starts today, it endorsed an article from the anti-Semitic, Holocaust-denying, 9-11 conspiracy website Veterans Today.

The article in question was republished from the English-language propaganda service of the Islamic Republic of Iran, PRESS TV. There is a great deal of cross-over material from PRESS TV and Veterans Today, as both services have anti-Semitism and Holocaust denial as part of their core values, along with an absolute detestation of the West in general and the United States government  in particular. 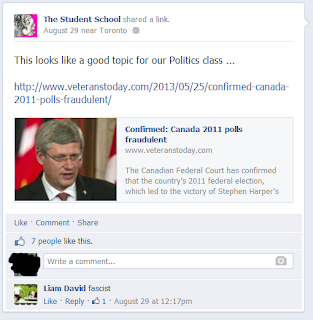 The article alleges that it was "confirmed" that Canada's 2011 election was "fraudulent." That assertion is based on false reports of election fraud in Canada and the article seemed to be culled entirely from an earlier PRESS TV video report by a hysterical 9-11 conspiracy theorist named Joshua Blakeney.

Iran has had a serious axe to grind against Canada since the latter suspended diplomatic relations with the Islamic Republic last year. Iran has used PRESS TV to produce preposterous conspiracy-type reports about Canada ever since, many of which are the work of Blakeney.

Betraying its radical ignorance to an alarming extent is the school's facebook "liking" of a comment by a student who calls Prime Minister Stephen Harper a "fascist."

It is hardly a surprise that a school that promotes deranged conspiracy theories would lack the basic understanding of such concepts as fascism. However, for a tax-funded Toronto public school to be promoting such not just erroneous, but detestable values to impressionable students should seem incredible.

Or at least it would be incredible, unless one has followed the history of incompetence and promotion of fanatical, radical ideas at the TDSB, Canada's most dysfunctional school board.

(based on background provided by the blog Socialist Studies) 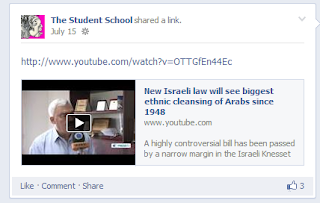 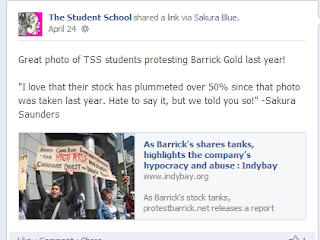 UPDATE: The heat from this post got their notice and the TDSB personnel  running "The Student School" facebook page removed the Veterans Today link.

However they still have a link up to an anti-Israel YouTube video from Iran's English-language propaganda service, and the page is replete with anti-Israel, pro-Communist postings.


Which means the hypocrites employed by the TDSB's only worry was getting caught, but they weren't quite bright enough to figure out what the fuss was about.

These people are paid with tax dollars to "teach" your children.

I cannot handle PressTV. Rabble I can deal with but not PressTV. Such a disgusting organization. I have posted a comment on the Facebook site. If this article is not removed I will post the video where PressTV's Josh Blakeney blames homosexuals in the Harper government for Canada's problems.

rabble.ca isn't much different than PRESS TV in that they are both propaganda websites that exist only to promote a particular type of ideology.

If anything, PRESS TV is more sensible since it's an Iranian-owned site promoting Iran's interests.

Whereas rabble.ca is a Canadian site, published by the wife of Libby Davies, the Deputy Leader of the Official Opposition in Parliament, and it too frequently serves Iranian and other non-Canadian interests.

Let see the Government of the U.S.A. states one of five entrants to Government employment has a suspect background and a probable private agenda.

Could it be there is a majority of Toronto School Board has a private agenda?

It's not even private!

If anyone bothered to look at the way they are being indoctrinated with this type of idiocy at the Ontario Institute for Studies in Education, which instructs teachers and helps form School Board curricula, it's all pretty out-in-the-open.

You clearly have a lack of understanding of the issues.

The TDSB takes direction from that edifice of new education OISE.

And OISE takes its direction from Iran who wants to make Canada in its own image.

That explains it all.

The alternative schools (and the parents who send their kids there) are indeed on the 'radical' end of things.

But as they operate under the authority of the TDSB, there are still rules and oversight. If the TDSB allows it, they have crossed the line into full-blown depravity that people have been warning about for years.

I don't think OISE takes its direction from Iran so much as they happen to have a common outlook in a lot of things, so their advocates have naturally come together.

Hope it was something I said. . . . I left a pretty scathing comment to the story. Asking why they are quoting a Iranian government news site. Followed by posting the link to a National Post article on Josh Blakeney and PressTV.