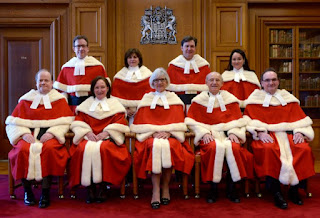 A ruling this week from Canada's Supreme Court effectively gives immigrants permission to lie on their citizenship applications.

The federal government had tried to revoke the citizenship of Helmut Oberlander, who served with a Nazi death squad that's primary purpose was the murder of innocent Jews. Oberlander lied about his Nazi past and participation in war crimes. However the Canadian Supreme Court decided that his lying about such vital information from immigration authorities was not grounds for taking Oberlander's citizenship away or extraditing him for a War Crimes trial.

This ruling places Canadian national security at grave risk of becoming a haven for war criminals. One can only hope that causes arise that will necessitate the removal of the current Supreme Court's members, seven of the nine of whom were appointed by Stephen Harper, so that they can be replaced with competent judges.
Posted by Richard K at 1:35 PM