Donald Trump's bombastic presidential campaign may be the single greatest exercise in trolling the media in history.

But it also provides perfect illumination into the bias and untrustworthiness of much of mainstream media.

Trump gave a speech yesterday where he talked about how he thought the war on Iraq was a bad idea. On this I disagree. It was a good idea terribly executed. But it's a subject on which there is much disagreement.

However, one of the points Trump was making in his speech was that Saddam Hussein had no tolerance for terrorists and made no bones about killing them. Immediately prior to saying that, Trump, no less than three times, described Saddam Hussein as a "bad guy."

Yet the media, in its relentless efforts at attacking the presumptive Republican Presidential nominee, has been deceptively describing the speech as "Donald Trump praises Saddam Hussein." 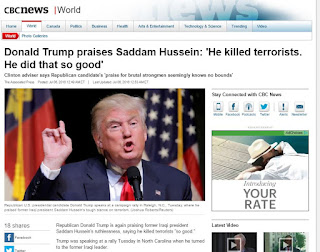 It would be as if I made the accurate statement that Hitler was the most evil man in history, but he maintained the roads in Germany a hell of a lot better than John Tory maintains roads in Toronto, and it was reported only as "Richard Klagsbrun praises Adolf Hitler."

Almost certainly, it's not coincidental that this preposterous media hyping of a non-issue with inflammatory, deceptive headlines is happening at the same time that the FBI has, to great outrage, decided not to lay criminal charges against Hillary Clinton for her grossly negligent and irresponsible storage of top secret emails.

It all gives one pause to think that Trump's tactic of attacking the mainstream media as patently dishonest is not only part of a prudent strategy, but is an entirely legitimate description of them.


Remarkable part about the Saddam thing isn't what Trump said. He's said it before. It's how media jumped on this when Hillary needed it.
— David Martosko (@dmartosko) July 6, 2016 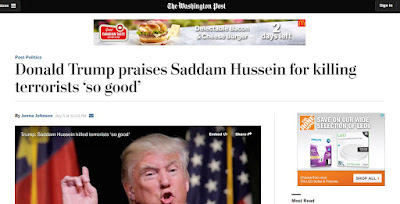