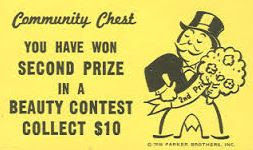 Hillary Clinton is like the Lena Dunham of politics. She's unappealing and untalented, but the media and the faction of people who refer to themselves using the terms "social justice" and "activist" in their social media profiles keep trying to convince the rest of us how great she is in spite of our disbelief.

Which is why Mrs. Clinton faces an extremely difficult obstacle to overcome at next week's Democratic National Convention.

Imagine if you went to a burlesque club, where you were promised the most fantastic, beautiful stripper imaginable as the star of the show. The lead-up act is a stunningly gorgeous woman, with smooth, shiny auburn hair, sparkling, emerald colored eyes, lush round breasts, in perfect physical condition, and she performs astounding acrobatics and amazing contortions. The act brings down the house and then, you get the featured performer, who is billed as the most wonderful thing you've ever seen.

Then Lena Dunham comes out to display her flabby, globule, cellulite-ridden body, with a miserable, scowling face that looks like it's better suited to an obese, ill-tempered Lhasa Apso, but lacking the spark of alertness and intellect one expects from a canine.

It would be anticlimactic, to put it mildly.

That, in analogous terms, is the danger the Democrats face next week when Bill Clinton gives the keynote address the Tuesday night before Hillary makes her acceptance speech on Thursday.

Bill Clinton is one of the great political orators or our generation. He has a natural feel for the public, warmth, and a genuine desire to connect with people from all walks of life, and the ability to relate to an audience in a packed stadium as easily as an individual in an intimate conversation.

Hillary, however, is something very different. She's cold, distant, and calculating, with an inability to conceal her self-interested ambition. Her efforts to be more human seem awkward and contrived. Her laugh is a hideous, unnatural cackle that sounds like she's trying out for a role in a repertory company production of Macbeth as one of the witches, and she has all the warmth of an IRS audit.

What she will do is remind Americans how much she is unlike her husband and what a disappointment she is in comparison.

Bernie Sanders, for all the intellectual vacuity of his policies, managed to arouse widespread excitement in his unexpected surge in the primaries. Hillary's nomination was supposed to be a fait accompli from the day she announced her candidacy, and Sanders' ability to have breathed down her neck for so long in the race highlights the genuine desire that even the Democrats have for any alternative to the woman Donald Trump describes as "The Secretary of the Status Quo."

Sanders too will be speaking at the Democratic Convention, and will in effect remind America that they didn't end up with the nominee who captured their imagination, but the one who commanded the entrenched Super Delegates.

Inevitably, as the Democrats raise their banners to Hillary, the media, which despises her Republican rival, will be trumpeting Mrs Clinton as a saviour.  But it will be impossible to hide from the public that the star of the Democratic show is going to be a big dud.